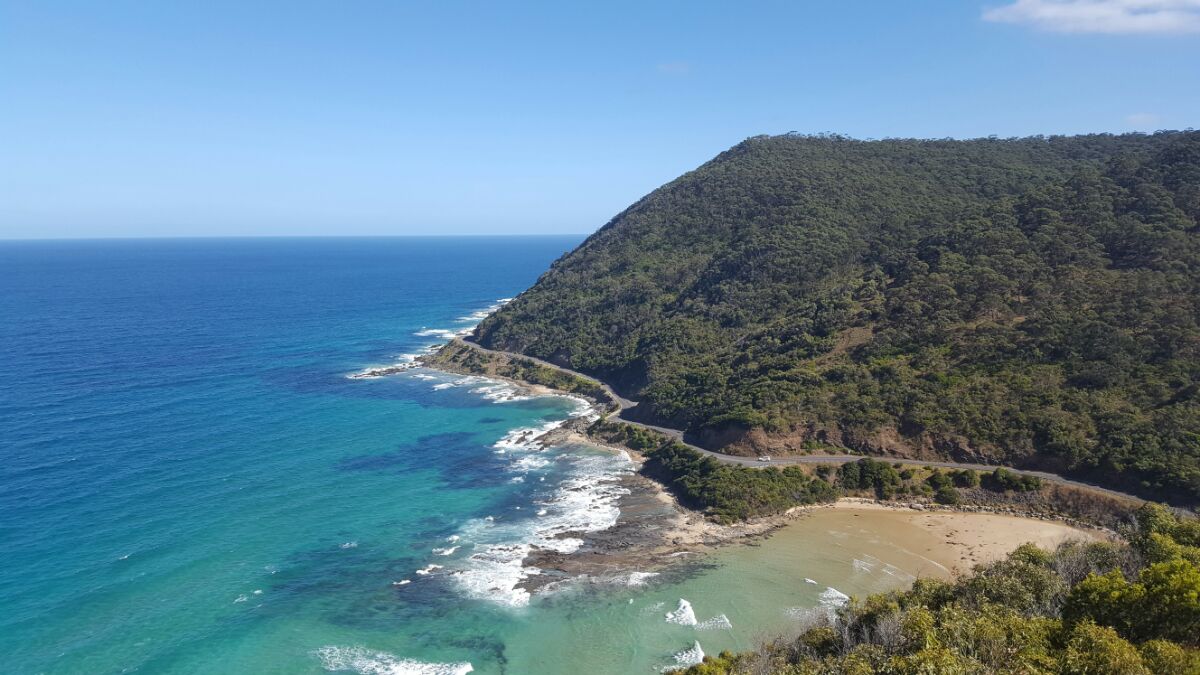 Australians love their El Caminos. Upon Barb’s arrival, I bet her that we’d see at least 70 El Caminos during her week here. She gladly accepted the bet.

I stopped counting after reaching 88 on day 7 of Barb’s Australian Adventure. While the El Caminos here are much more stylish than back in the States, they are still hideous and I can’t figure out why they are such a hot item here. 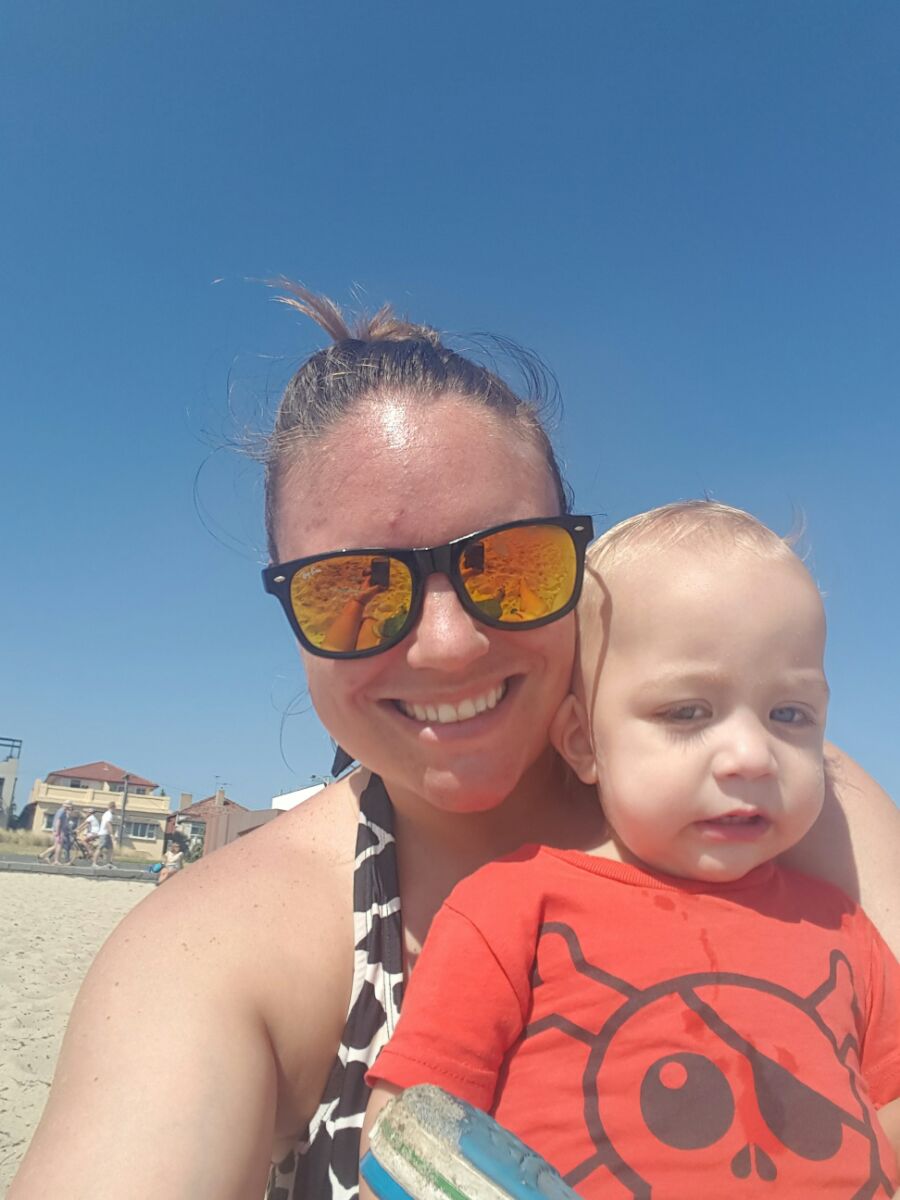 On Monday, we took the kids to St. Kilda Beach which was awesome. The waves were coming into the shore gently and the water was shallow so Chloe was able to walk pretty far into Port Phillip Bay without it reaching past her knees. That night, Barb and I ate dinner at Easey’s. Located in Collingswood, the restaurant is situated in three old tram cars on top of a roof that overlooks downtown Melbourne.

This gives a whole new meaning to rooftop bar/restaurant!

It was a very unique place. Easey’s even had Coors on tap so they got some bonus points in my book. 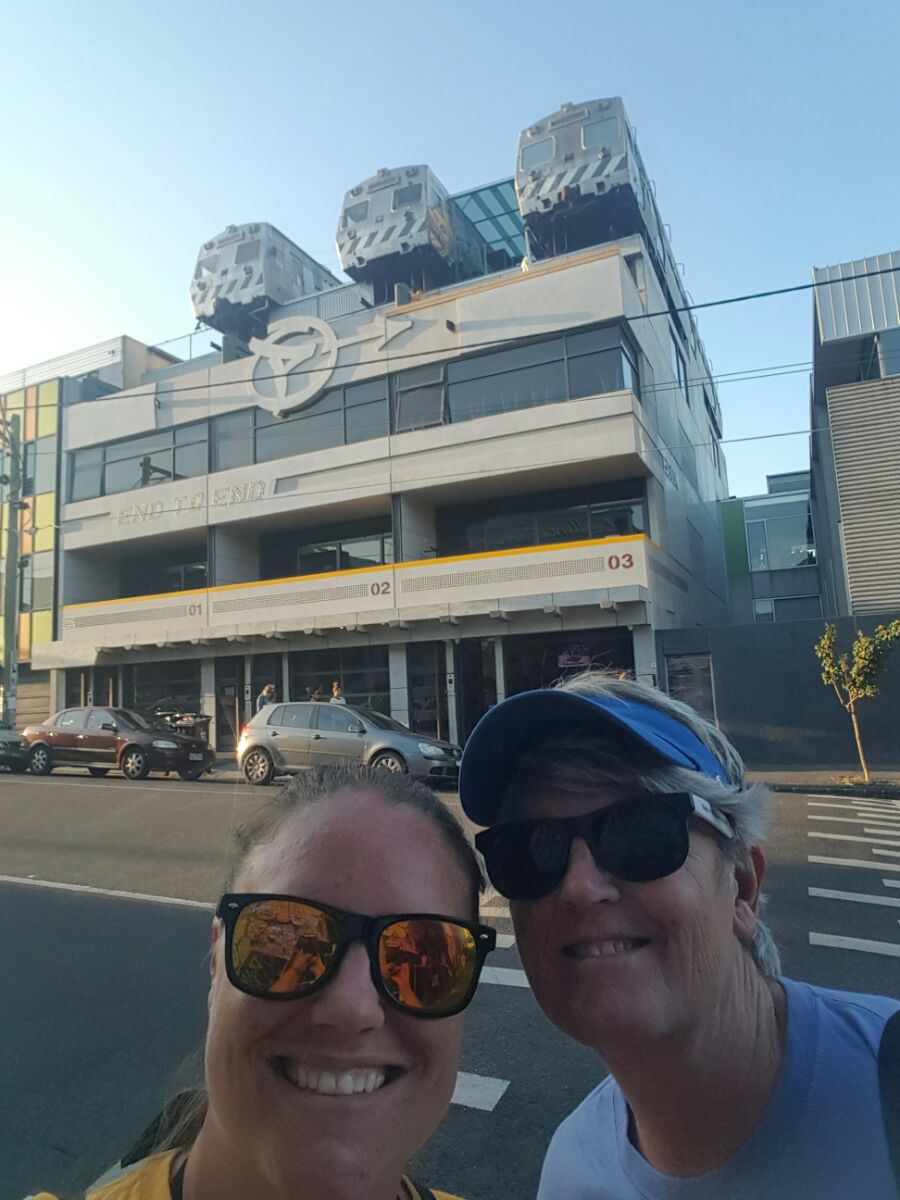 On Tuesday, Barb and I took the kids to Werribee Open Range Zoo where we took a 40 minute safari ride to see rhinos, giraffes, Texas longhorns, zebras, and more. After the safari ride, we walked through one of the open range exhibits where we were able to see four kangaroos! These ended up being the only ‘roos we’d see here in southern Australia.

That night, we ate at a Mexican restaurant. I’d been craving chips and salsa since I left the States in December. I didn’t see it offered on the menu so I asked the waitress if I could order chips and salsa. She looked at us apprehensively and said, “Yeah, I think we can make that for you.” Fifteen minutes later, she delivers French fries and salsa to our table. 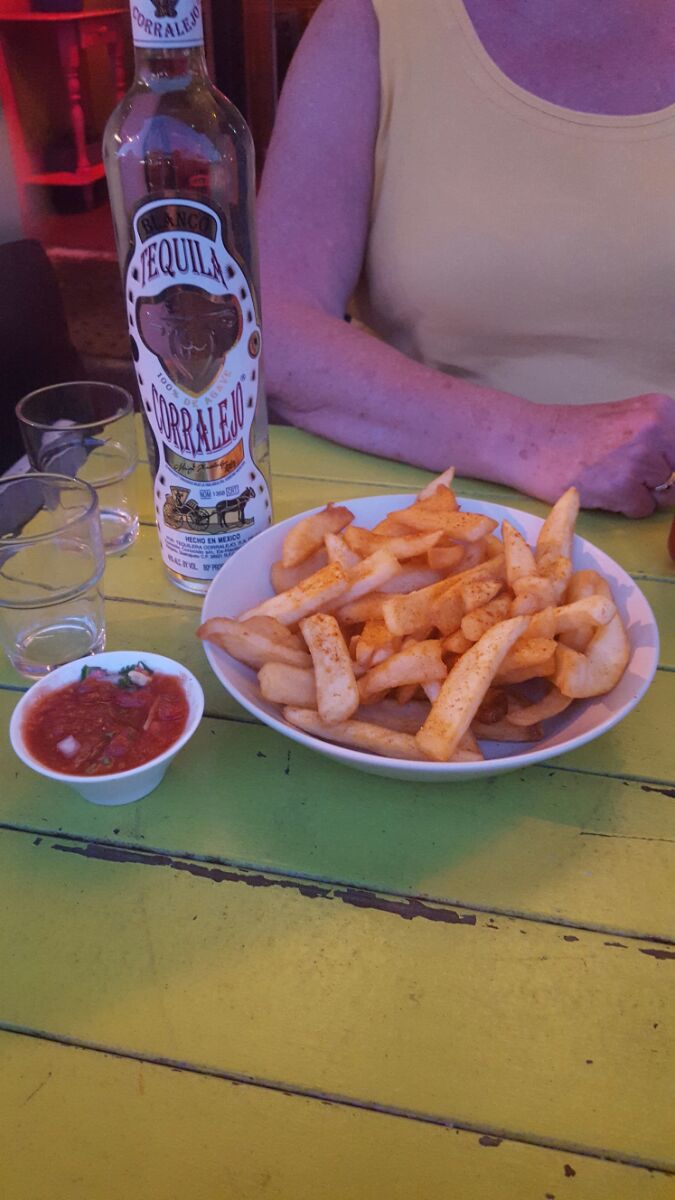 Barb and I had a big day on Wednesday. We started it off by driving down to Mornington Peninsula’s Hot Springs. There were 22 different hot pools on the grounds, plus three cold plunge pools, one relaxation room, and one sauna. While we spent three hours here, you easily could have spent an entire day here. They even had chairs on multiple docks overlooking a pond which would have been awesome to read a book and relax there. 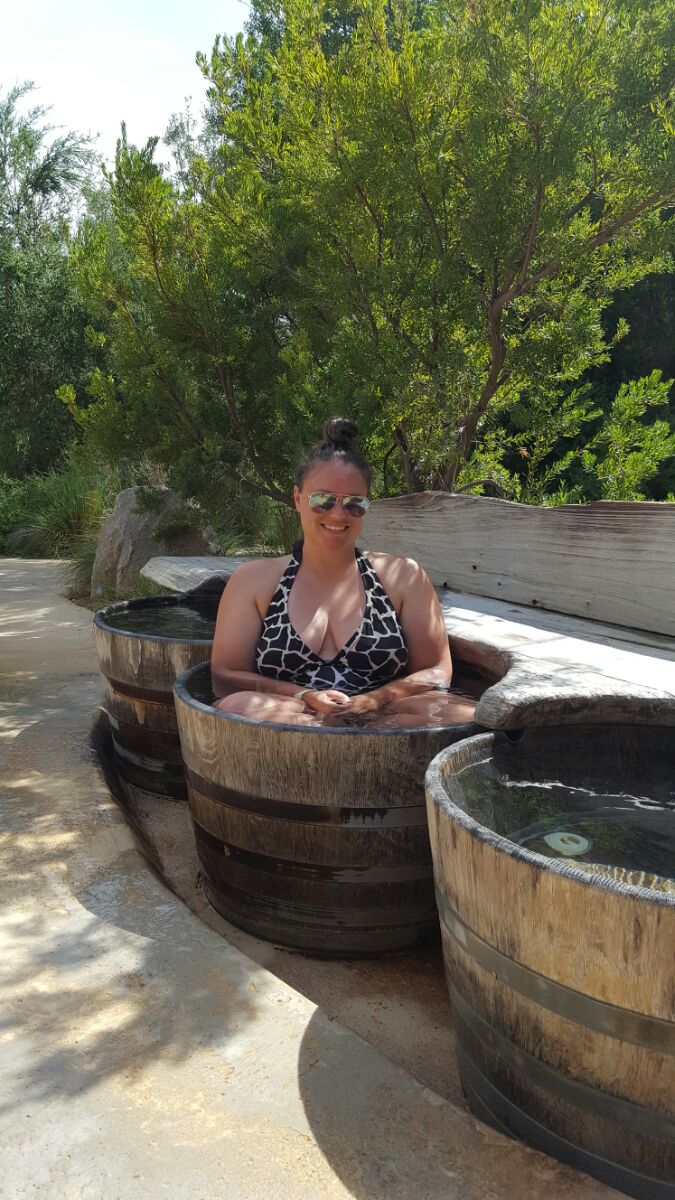 The hot springs pools ranged from hand baths, to foot baths, to massaging  showers and everything else in between. After every 4-5 hot pools, there was a cold plunge pool and yes, it was extremely cold.

I feel like I’m back in college taking ice baths after practice. Absolutely miserable. 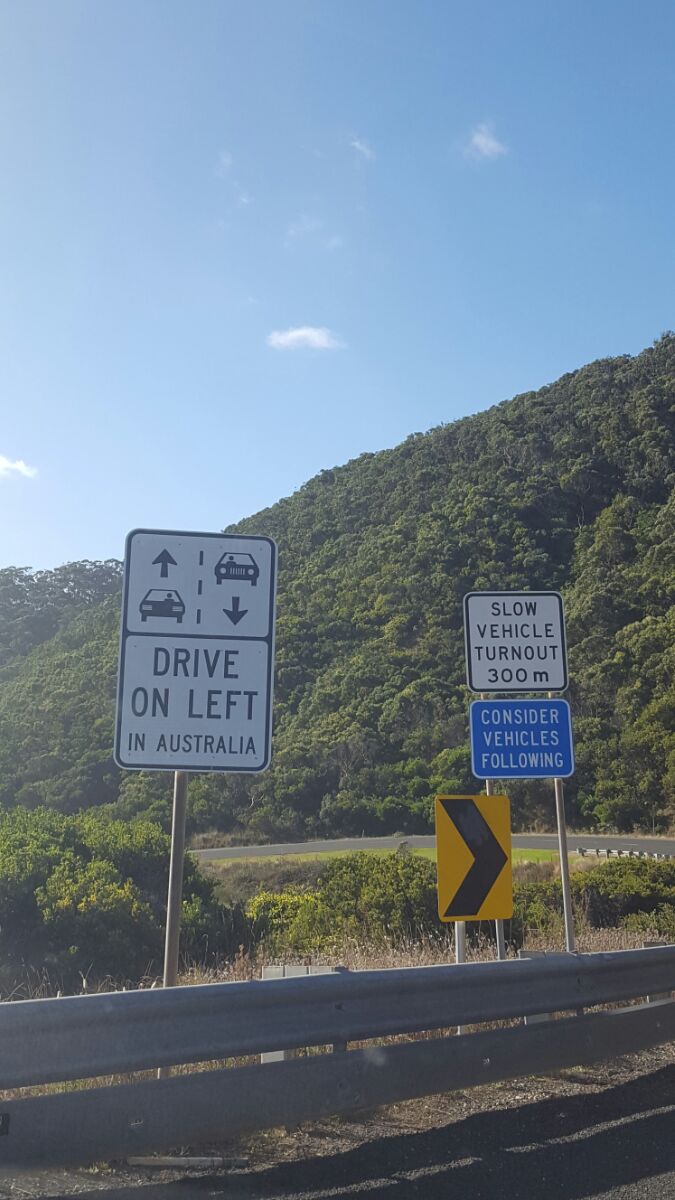 After the Peninsula Hot Springs, I talked Barb into trying to drive our rental car. When turning out of the parking lot, she immediately turned onto the right hand side of the road.

You’re not in America anymore, Barb!

Her fun lasted all of 3 minutes before I took over the reins.

Adam, is this what you felt like in Germany during my drive on the Autobahn?! 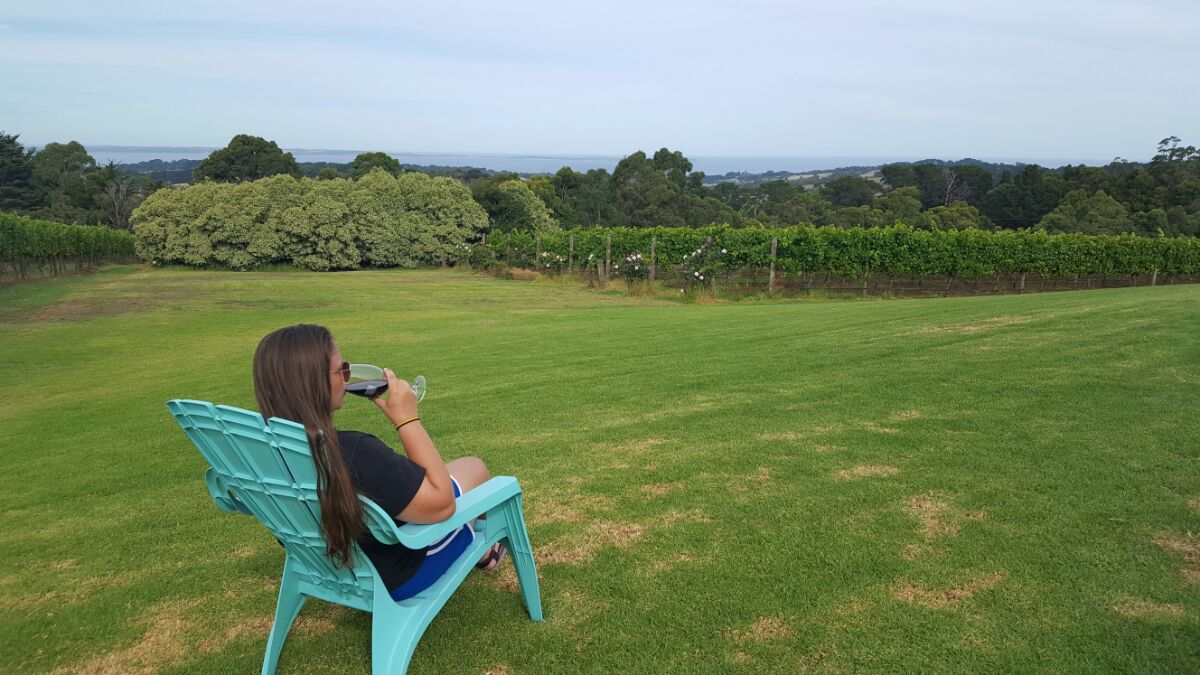 Next up was visiting wine country. I’d be interested to know how many wineries per acre there are in this area because we passed one after another after another during this drive. After indulging in tastings and one glass of wine, we headed to our final destination of Phillip Island to watch the nightly Penguin Parade. 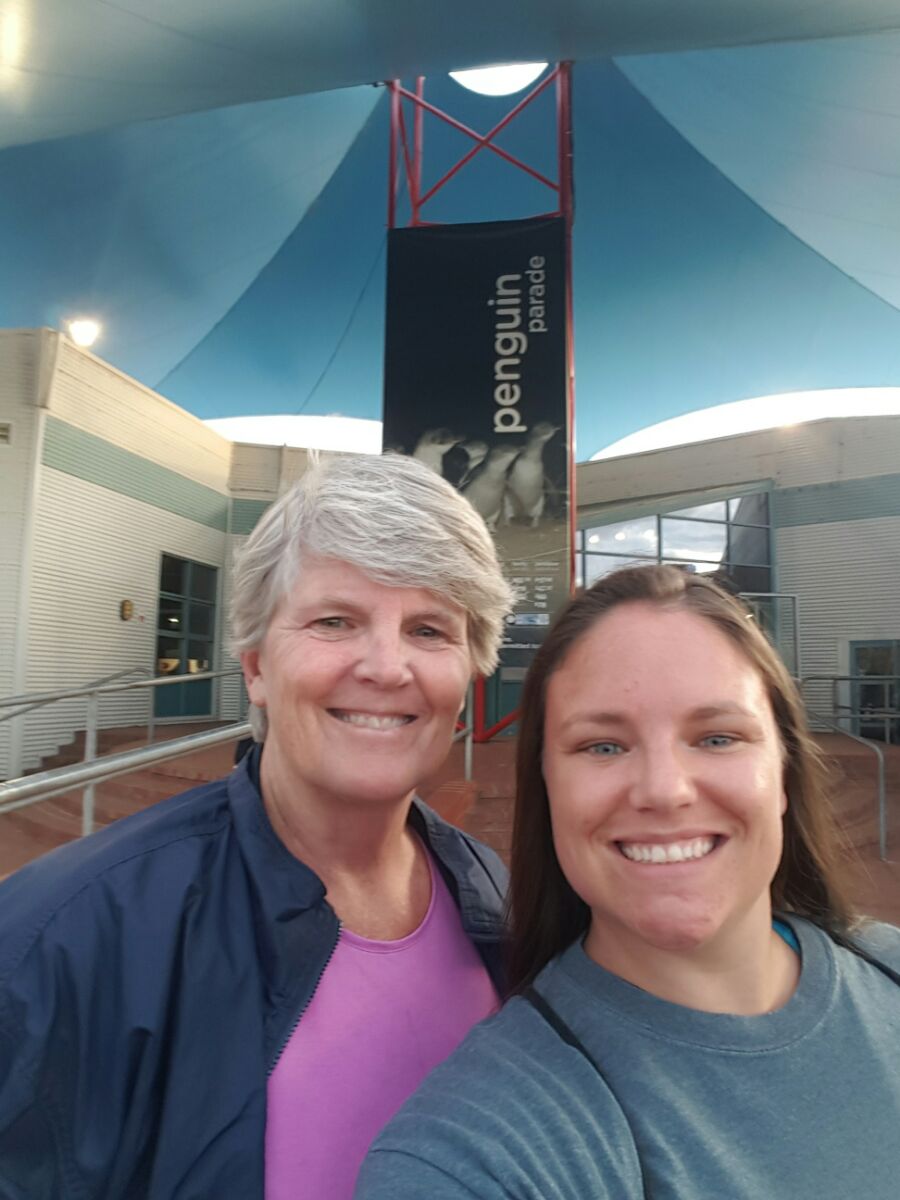 The Fairy Penguins (tiny little creatures) wait until after sunset to come in from a day of finding food in the ocean before waddling up the beach to their homes (either man-made boxes or burrowing in the sand). It was pretty cool to see them wait on the water’s edge until they had a group of 10-20 and then waddle up the sandy hill.

Upon returning back to my apartment, Barb notified me she needed to do some laundry that night. “Now, don’t judge me, but I’ll be wearing these same clothes again this week.” Um, I’ve been wearing the same four outfits for the last four months straight. Judgement free zone here. 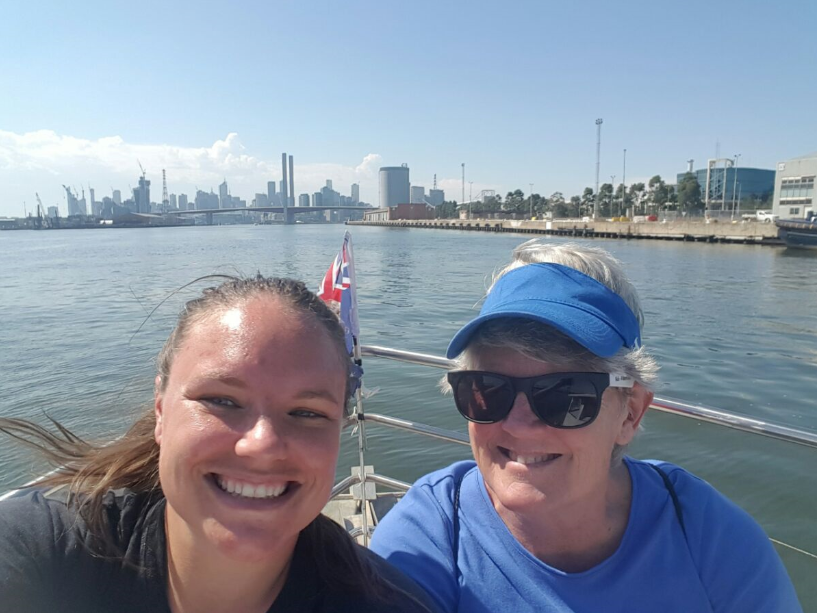 Chloe thoroughly enjoyed Barb’s company this past week. Anytime Barb left the room or was out of her sight she asked, “Where’s your friend at?” or “where did he go?” (She’s still learning her pronouns.) On the way to the park Thursday, Chloe piped up from the backseat, “Is your friend grey?” Barb responded, “Me? I have grey hair.” In true fashion of a child’s innocence and honesty, Chloe quipped back “Your body is grey too!”

Just stick a dagger through Barb’s heart, why don’t ya?!

For the first time in my life, I am tan and Barb is rather white. I’m not sure how I kept our vehicle on the road because I was laughing so hard I had tears coming out of my eyes. And believe me, Barb did not let me live down that comment of Chloe’s for the rest of the week. 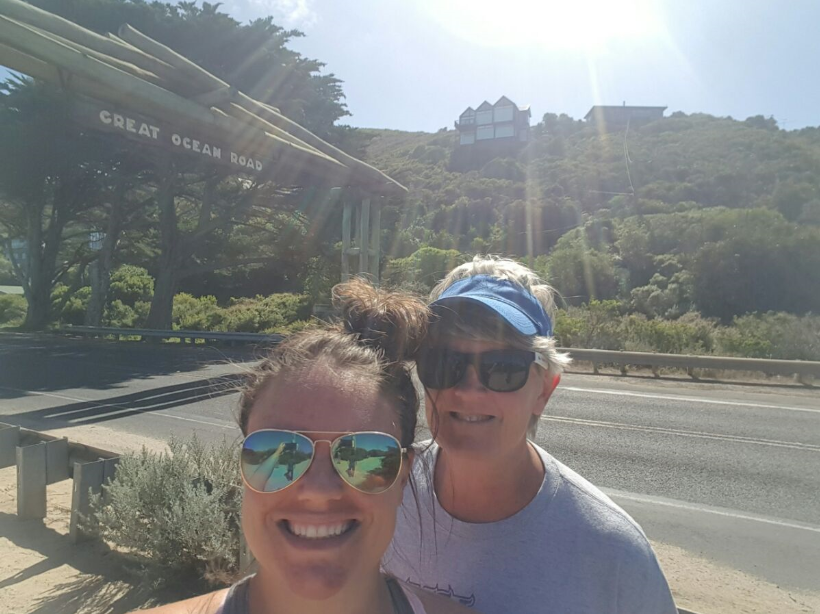 Barb and I spent Friday and Saturday on the Great Ocean Road. It was breathtakingly beautiful!!! I’ve never been on California’s Highway 1, but I’m guessing it’s similar.  The entire stretch is 243km (151 miles) and we covered 198km. While we were able to see one koala in the Werribee Open Range Zoo earlier in the week, it was stunning to see koalas out in the wild along our route.

The first night we stayed in Apollo Bay in an AirBNB. It was the most unique AirBNB I’ve ever come across…. a Native American tee-pee situated in a campground right on the Great Ocean Road!!! While it amplified the sound of the wind coming off the ocean, it was surprisingly warm and comfortable inside throughout the night. 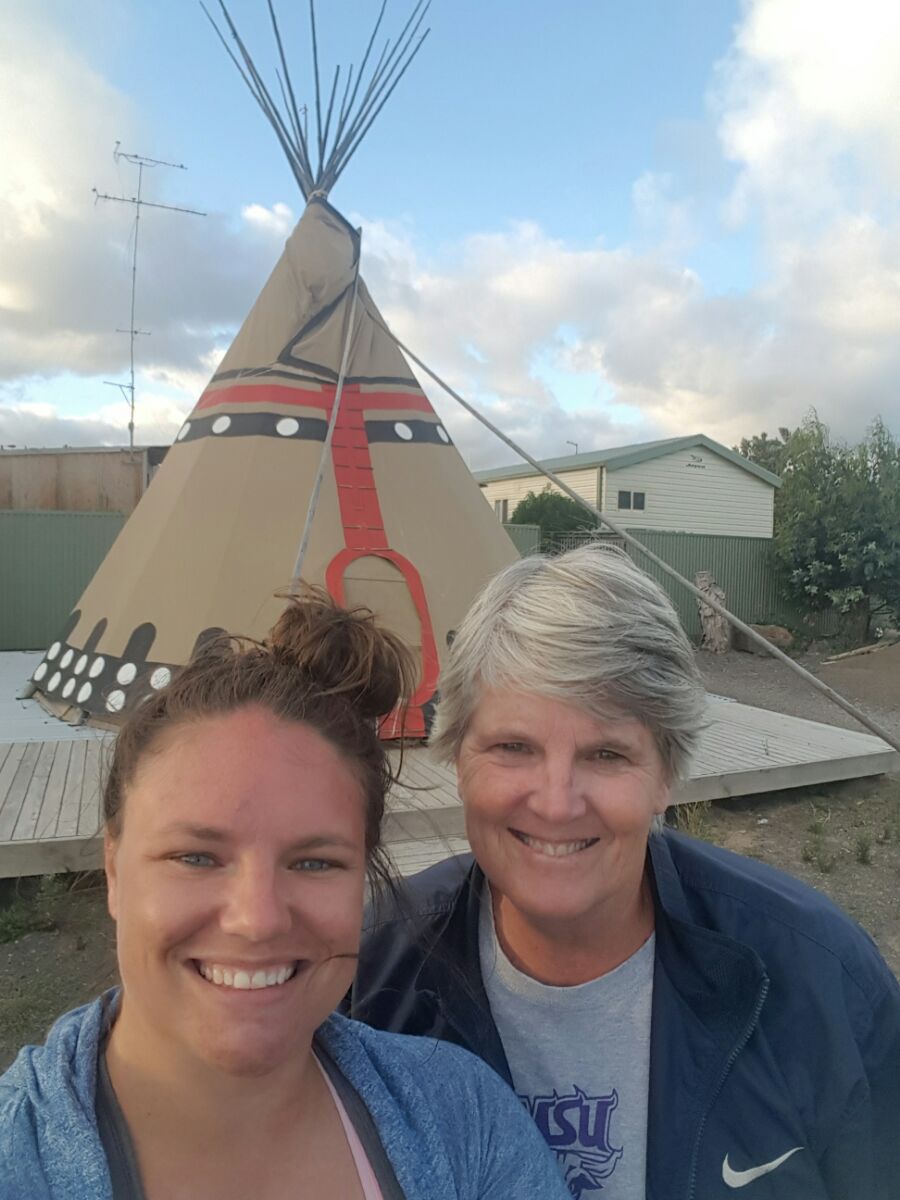 My first favorite part of this trip was the 60km stretch between Lorne and Apollo Bay of hairpin turns right next to the ocean with no guard rails. I felt like I was a professional driver! Barb may have thought differently as she kept grabbing her door and muttering, “Oh geez!” about every 5 minutes.

We should have rented a scooter for this drive instead of a car. Weeeee!!!!! 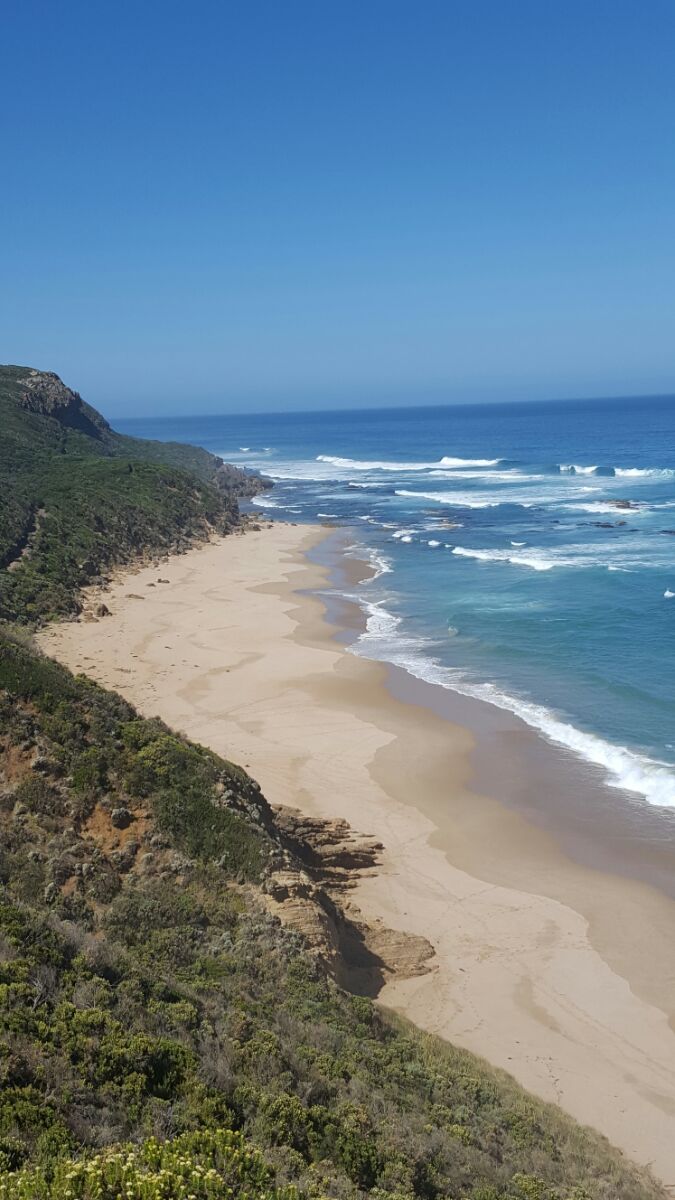 My second favorite part of the trip was at Castle Cove Lookout when we decided to  forgo a 1 hour rainforest hike and instead hike down to the secluded beach. While there were some surfers farther out in the water and a drone flying overhead, we had the beach to ourselves! 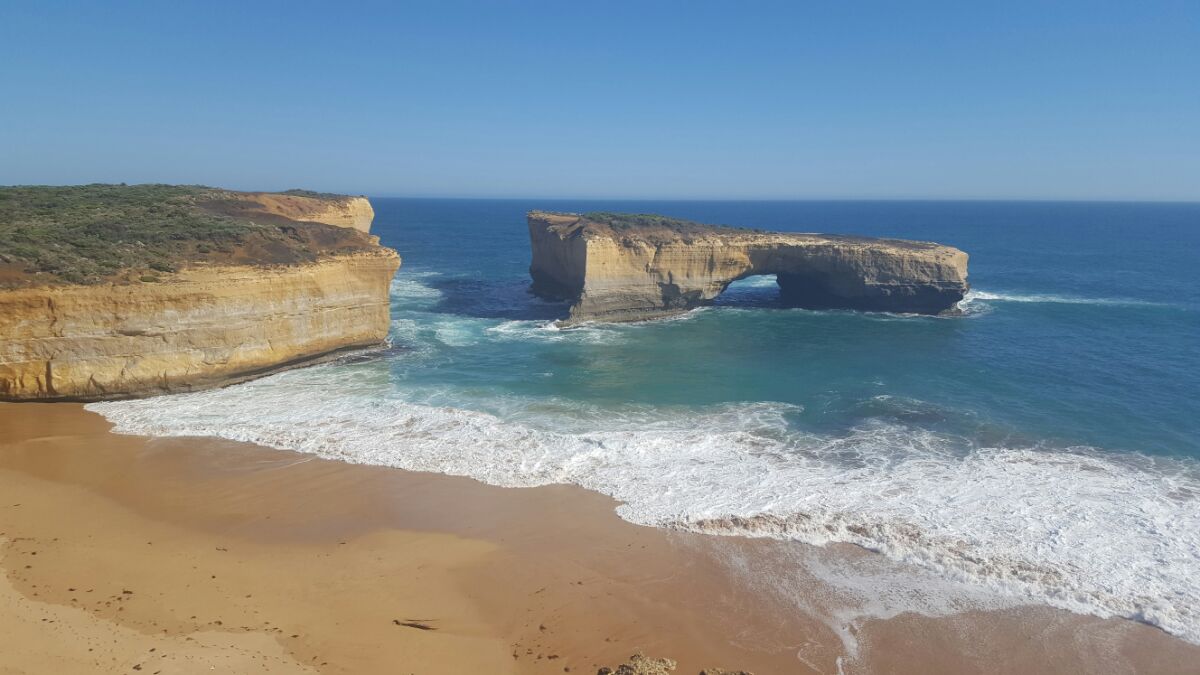 Barb is now somewhere over the Pacific Ocean heading back to reality while I’m enjoying a lazy Sunday, thinking how fortunate I am to be on this adventure. I truly understand the “everything happens for a reason” saying.

From moving to Denver to work for Kick It 3v3. To the 88 nationwide job applications I was denied before getting hired at South Suburban Parks and Recreation. To the torn ACL which amped up my babysitting gigs.

To the Germany trip which sparked an overwhelming desire. To traveling extensively while sitting in rush hour traffic and being an hour late to babysit Chloe and Hunter that fateful November night, all led to this point.

I am beyond grateful for this opportunity and am truly living life to the fullest right now. 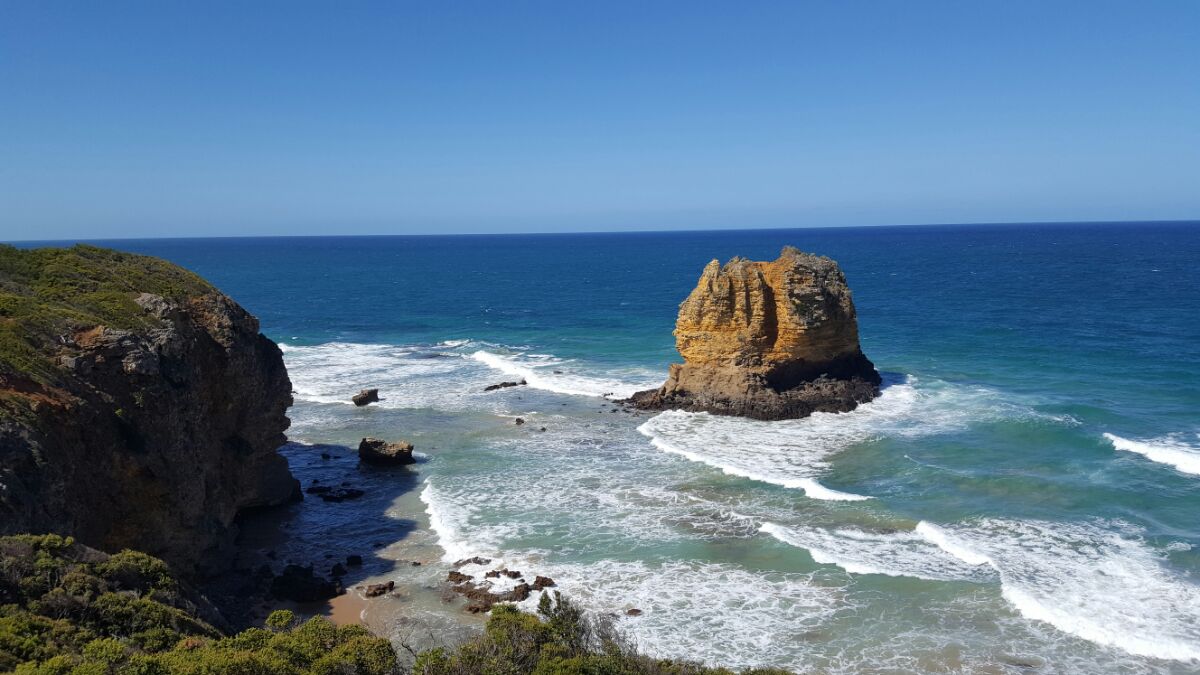