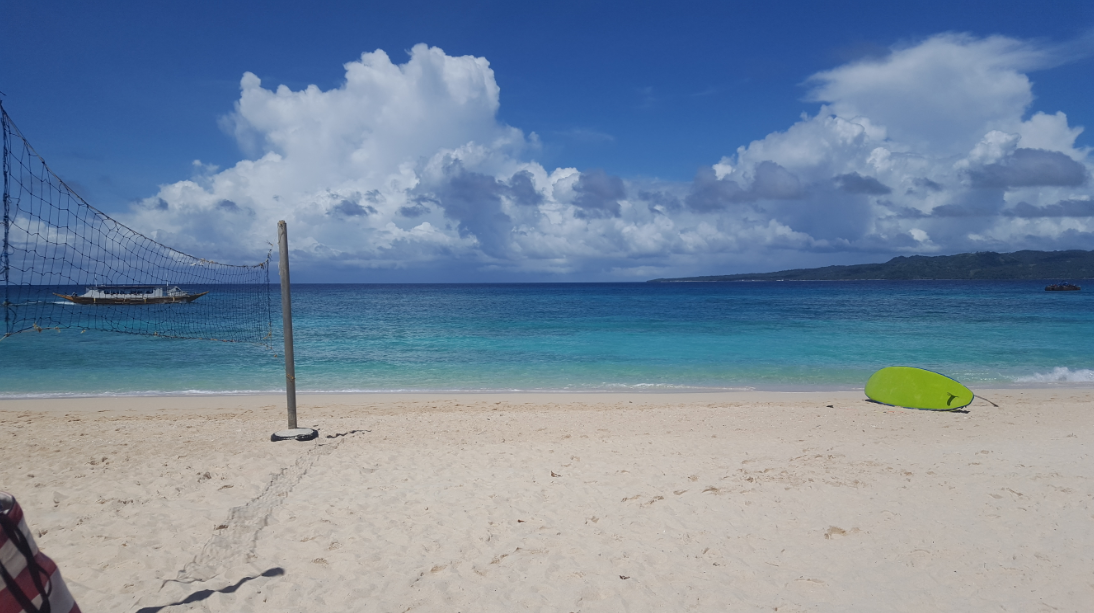 I flew with Air Asia from Seoul to Manila and wow, they really take to heart the word Asia in their name. The seats were tiny and had practically no leg room. When MY knees only have an inch and a half to the seat in front of me, you know it’s cramped!

Oh no… Adam and I are flying Air Asia when we’re in the Philippines… he’s not going to fit!

Unable to contain my giggles, I Skyped Adam while others were still boarding. We concluded not only does he need to stop eating from now until he arrives, but he’ll also need to chop off about 4 inches of his legs. Let’s just hope our Air Asia flight isn’t full that day! 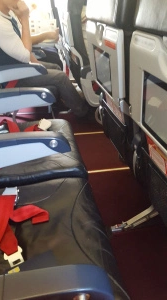 My initial arrival to Manila was glorious. I walked off the plane, collected my baggage, and cleared customs within 20 minutes. And that’s about where the gloriousness stopped. I found the taxi service the hostel recommended. I told them where I was going and they motioned for me to take a seat. I noticed that traffic wasn’t moving…. like at all…. every 20 minutes or so, traffic would move forward about one car length. About an hour into waiting for a taxi, I chatted with an older gentlemen next to me.

After bonding over Australia (where he’s from), farming (he raises cattle), and the absurd wait time for a taxi, he decided it would be a better idea to go up to the Departures floor and grab one from there. We were both going to the same area of town so I tagged along and shared the taxi with him. Fast forward three and a half hours later, I arrived at my hostel… a mere 6km from the airport. That’s 3.73 miles… that’s moving at a speed of 1 mile per hour.

I could have walked faster!

I asked the receptionist at my hostel if there was something going on in town. Her response? “Nope. That’s just Manila traffic.”

Adam isn’t going to like it here! He can’t even stand traffic going to the mountains which can take three hours to cover 70 miles.

Saturday was spent walking around Manila (no way was I getting in a taxi again!) and deciding that I will go crazy if I stay there for the next 8 days until Adam arrives. Too many people. Not really anything to do. I felt confined with the sheer amount of traffic and nothing really being accessible because of it. So instead, I booked myself a 4 day trip to Boracay, Philippines #1 tourist destination!

Sunday and Monday were spent in a new hostel researching Boracay. My initial hostel in Manila was SUPER cheap… as in $2.38 per night cheap, but I just wasn’t feeling the vibe there. Everyone kept to themselves and I felt like more locals were using it as a place of residence rather than travelers on their way through. So I switched to a different hostel which was MUCH better. I actually felt like I was at an all-inclusive resort. There were doormen, bell hops, and you loaded up an RFID bracelet as your way of payment at their bar and restaurant. 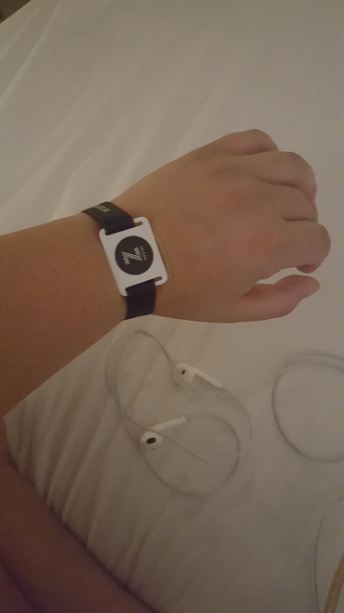 I stayed in an 8-bed mixed (coed) dorm. My late 40’s bunkmate enjoyed walking around in just his whitey-tighties. One roommate thought it was somehow appropriate for him to pee with the door open, in full view of others (we had an ensuite bathroom).

I hate to break it to you fellas, but you’re not impressing myself or the other girl in this room.

Tuesday afternoon I began my journey to Boracay. I should preface this by saying I easily could have flown from Manila to Boracay. But where’s the adventure in that?! Instead, I chose to take an Uber to the bus station, a 3 hour bus ride to Batangas Pier, a 10 hour overnight ferry to Caticlan Port, and then a 5 minute pump boat to the island of Boracay. All of this cost me a mere $25.89 whereas the flight would have been over $100 for the last minute booking. 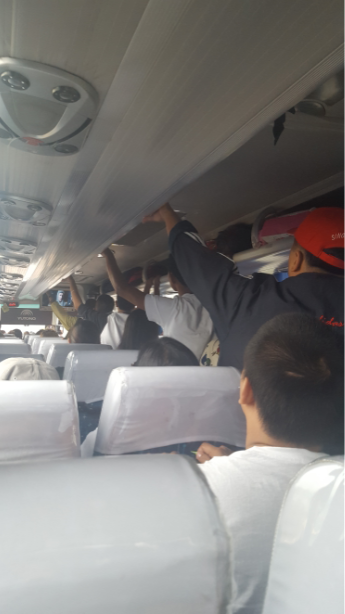 The bus ride was quite comfortable. It was an air conditioned charter-style bus that made random stops along the road. The roadside passengers were forced to stand or sit in the aisle for the duration of their ride whereas the passengers that boarded at the bus terminal were given a seat.

The ferry experience was much better than I expected. It was like a cruise ship, but a hostel version. On board there was a karaoke bar, restaurant (we were served one meal), convenience store, air conditioning, and a doctor. But rather than a 2 person room, I was in a 192 person room. I was fortunate to have a relatively quiet room and got about 8 hours of sleep. 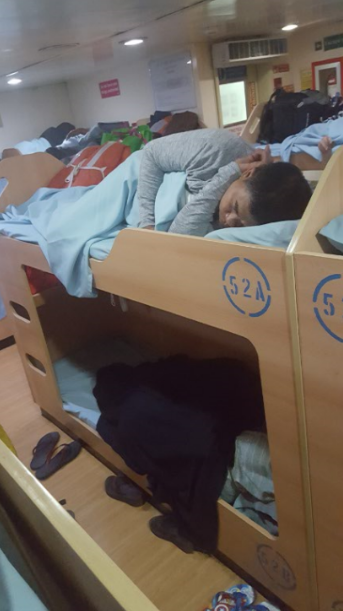 Since I wasn’t able to check into my hostel for about 3 hours, I headed straight for White Beach which is what Boracay is known for. And it did not disappoint! The sand was white and powdery. The water was crystal clear. There were views of other islands in the distance. I felt like I was looking at a back drop. 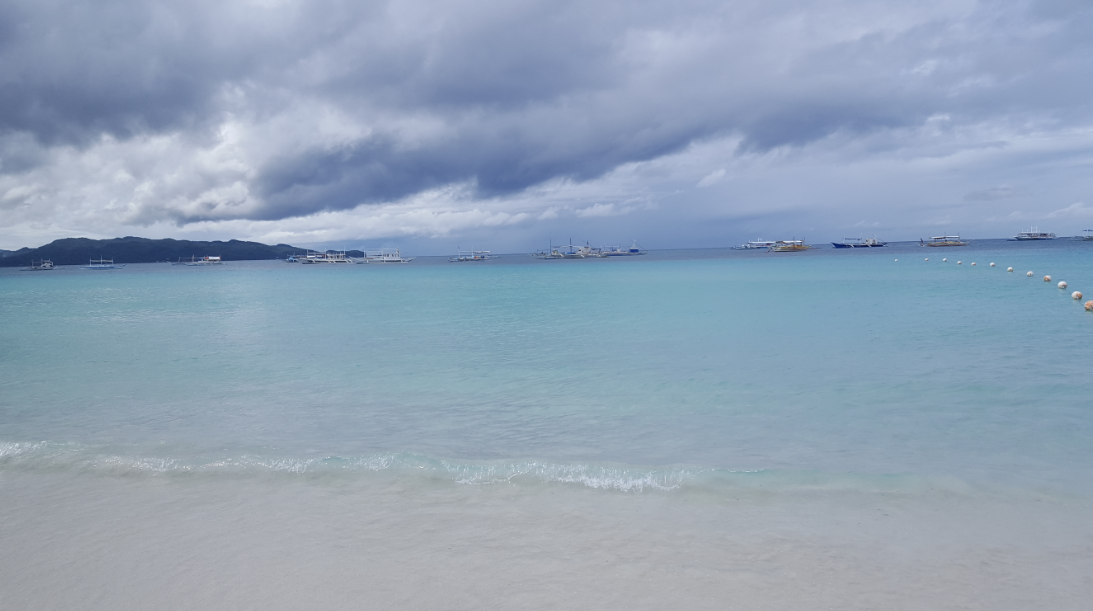 I sat down on a log and dug through my bag to find my camera. I was approached by a late 20s Filipino lady who was very concerned that I was there by myself and asked numerous times if I was sure I was OK before going back to her husband and kids. I later found out, it is pretty uncommon for a solo female to be on the island.

I think Barb appreciated this lady checking on me more than I did. 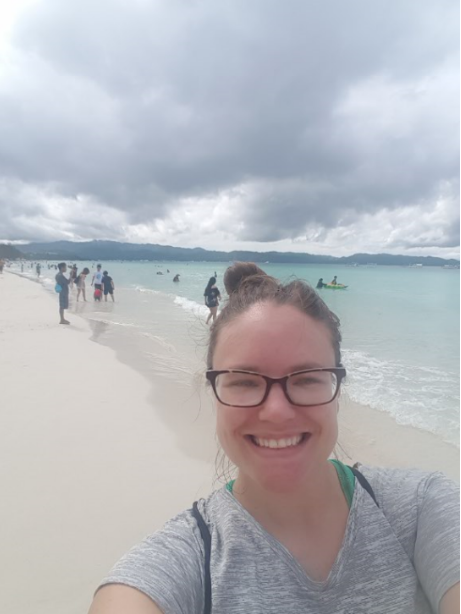 The evening was spent indulging in alcohol thanks to free hourly shots and a beer pong tournament at the hostel. Oh and it was also Wig Wednesday.

Now this is my kind of hostel! 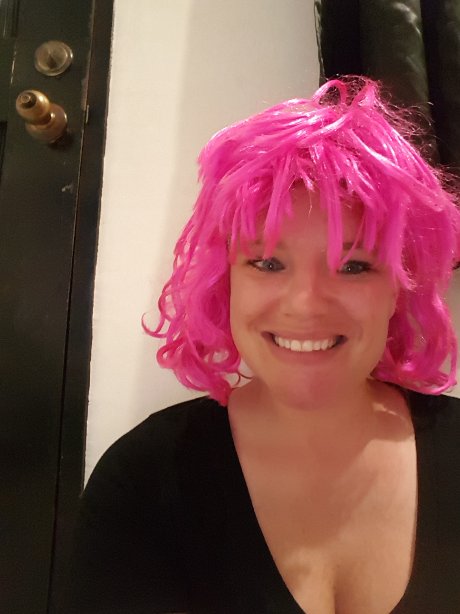 All thanks to the previous night’s imbibing, I was pretty worthless for most of Thursday. I spent the day in bed chatting with my bunkmates while the rest of the hostel partook in the Thursday Session…. aka free hourly shots and happy hour pricing from 8am-6pm. Yes, you read that right. At 8 in the morning, I was awoken to “Attention ladies and gentlemen of Mad Monkey Hostel, there are free shots at the bar!”

Excuse me while I go throw up.

That evening started out with more beer pong and ended with a late night trip to McDonald’s so you could say it was a another success. Did I mention Boracay is known as the party island of the Philippines?

Friday. Oooo, Friday was a good day! While trying to figure out transportation to Puka Beach, two German girls who I had met the previous night, mentioned they were also headed there so we all went together. Puka Beach was recommended by a fellow American at the hostel and it was amazing! It was WAY less crowded than White Beach and the water was clearer which I didn’t think was possible. After taking numerous pictures and videos of the gorgeous scenery, we rented an inflatable flamingo and unicorn and spent the day in the water. Just picture perfect. 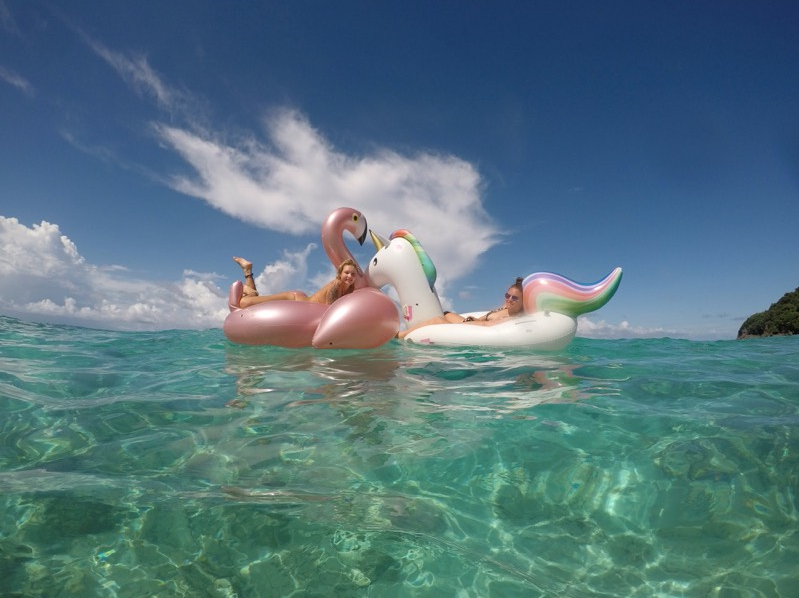 The evening was spent sober back at the hostel with the Germans. I had to catch my ferry back to Batangas Pier the next day and the thought of being hungover on a 10 hour ferry ride was incomprehensible. My ferry was originally supposed to leave at 8am, but was delayed to 4:30pm due to tropical storm RAMIL moving through the area. The typhoon that hit Japan two weeks ago? Yep, it also started as a tropical storm in the Philippines.

Again, the ferry ride was pretty uneventful. This time, my ticket was in the Super Y class (read as the cheapest ticket possible) so my bed was right next to the all night karaoke bar with no air conditioning. Imagine sleeping on the top deck of a cruise ship. Open air and no real room. That was my situation.

So I was extremely confused when I shaken awake at 2:30 in the morning by the cleaning staff. “Ma’am? Sorry to touch you, but you weren’t responding to my voice. We’ve arrived in Batangas. You need to leave so we can clean.” Yep, I was THE last passenger off the ship. Apparently, I’ve adapted to sleeping through noise. I boarded the bus back to Manila, only to wait an hour and a half for the ferry staff to hop on. I arrived in Manila at 6:30am and just hung out until my AirBNB was ready at 1pm. After taking a long and peaceful nap, I wrote this blog and am now headed to the airport to collect visitor #1… Adam!

This week should be rather comical…. Adam trying to live like a backpacker for a week…