How I Survived A Scooter Rental and Muay Thai Boxing Match 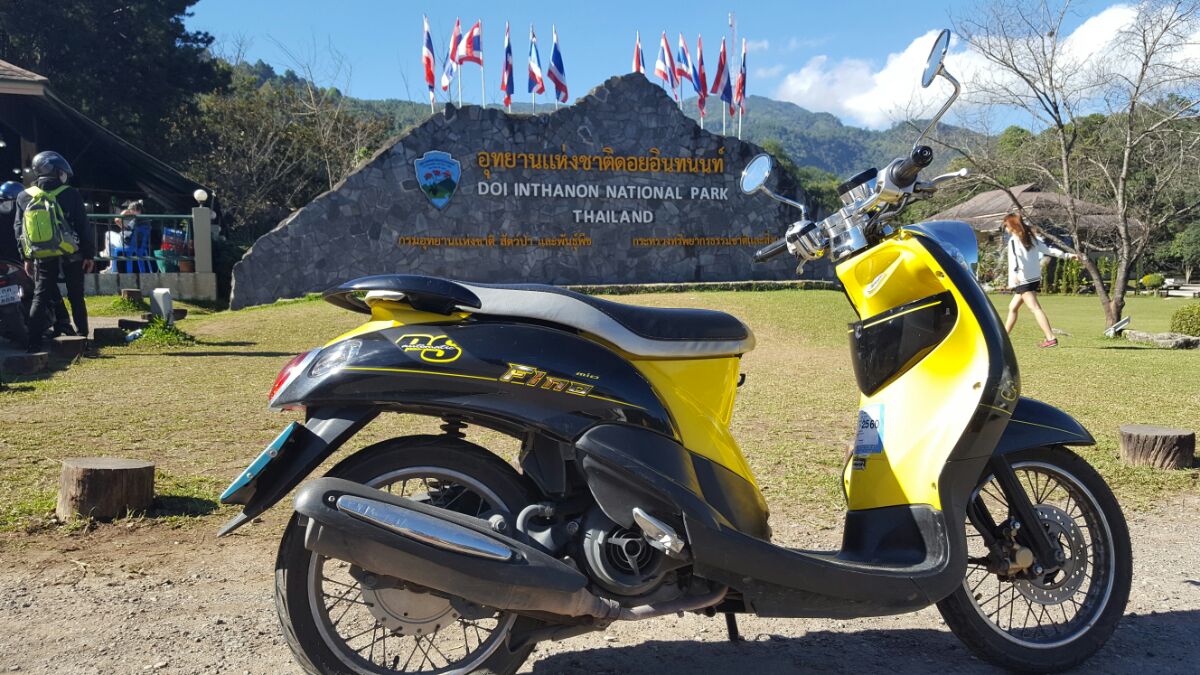 Woohoo! No more rain! After 15 days straight of rain, the sun has finally made its presence. And man, do I have a sunburn to prove it.

Over the weekend, I stumbled across this Facebook group titled Worldschoolers. It’s basically people who travel while their kids are still school-aged. Some of the families follow a home-school curriculum while others have somehow managed to fully pull their kids out of school and are using real life experiences in its place. Some families only travel for a couple months while others have been traveling for years. It’s a worldwide group with 50,000 members strong.

Sunday night I had posted on the page saying that I was located in Chiang Mai and had a 4 year old and within an hour, a playdate for Monday at Maya Fantasia was arranged. Seriously, I’m rocking at this nanny thing! I mean, I just set up a playdate. Who am I?!

While I struggled to relate to the moms (nope, I don’t find it difficult to balance work and the kids; nope, I don’t get annoyed of the kids because I only have them for 6-8 hours a day), Chloe had a blast and I’m sure was glad to play with two other kids her age who spoke English. I’ve already connected with a family who will be in Bali at the same time as us and also has a 4 year old for Chloe to play with. It’s truly amazing what technology and the internet allow us to do. 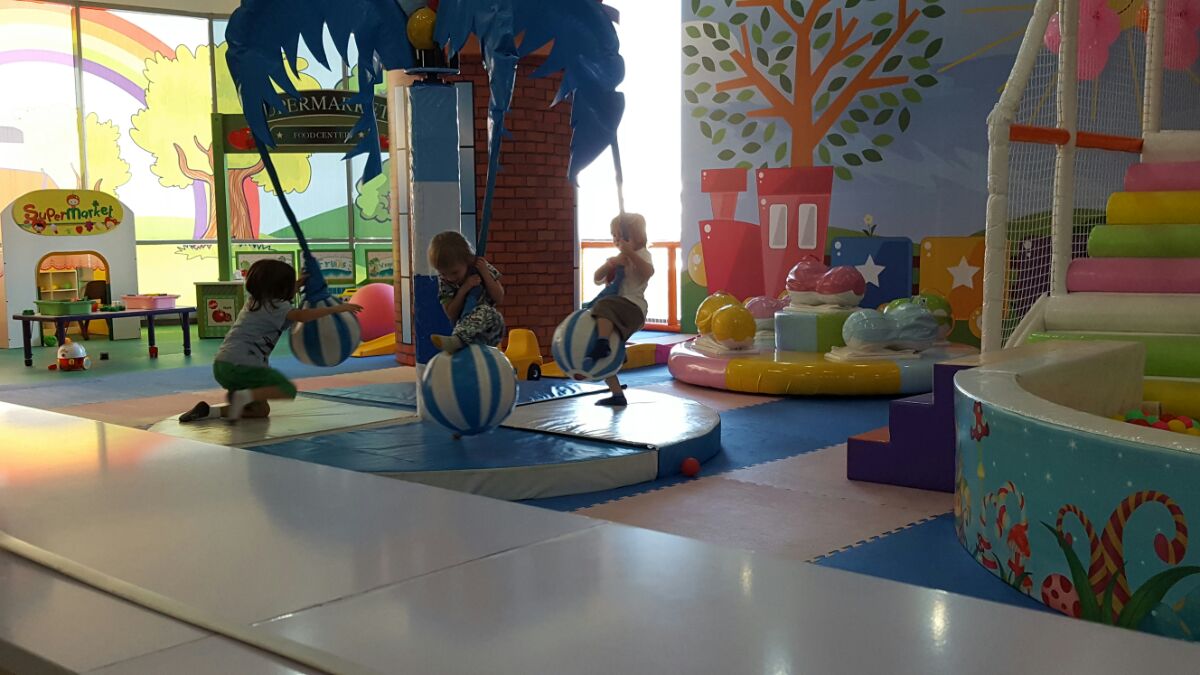 Monday night I went to my first Muay Thai boxing match at Loi Kroh Boxing Stadium with a friend from Holland that I met on the pub crawl. It was not what I expected! The boxers entered the ring with capes on. Modern day superhero? They danced around while the stadium filled with calming music during their warm up. This is how you get pumped up to fight someone?! The last fight of the night was 10 year old kids. How many concussions will they endure before they’re 18? Despite all that, the roundhouse kicks to the face and the two knockouts were awesome! I would definitely go again, but leave before the kids fight. I felt a bit uncomfortable as spectators cheered on kids beating each other. 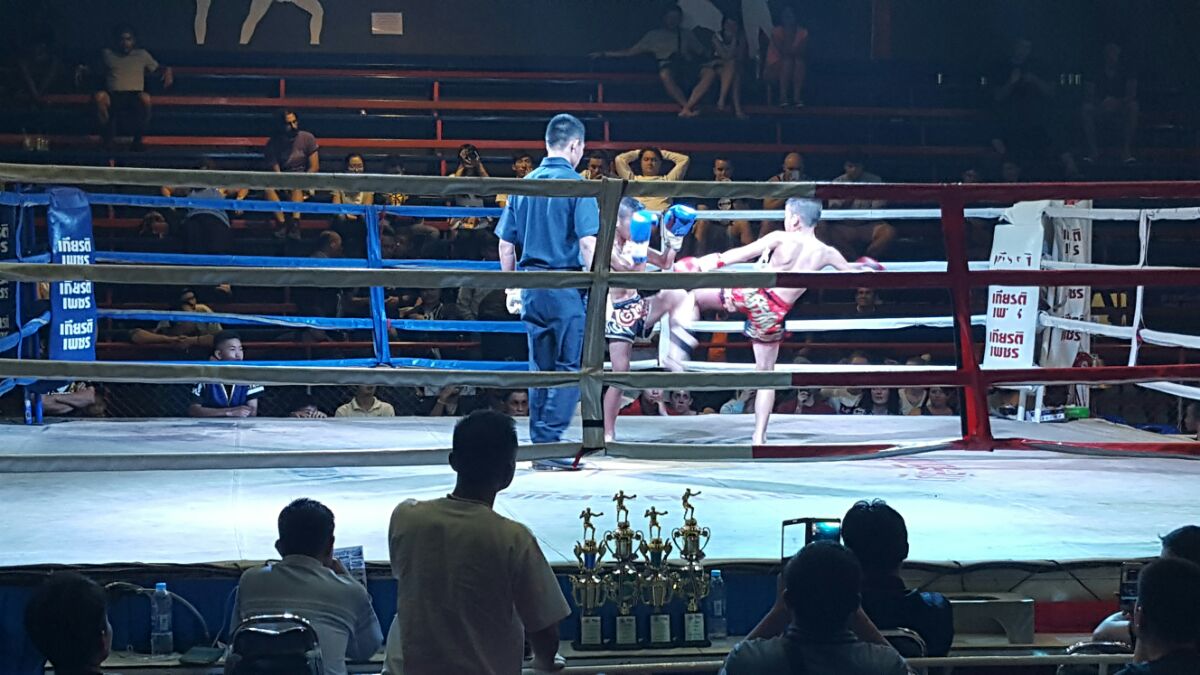 On Wednesday, I got a foot massage… by a female prisoner! Inmates are taught tangible skills inside prison so they can be productive members of society after their release. When an inmate has 6 months or less remaining on her sentence, she is bused into the city to practice her skills. I don’t know how often a specific prisoner gets to do this, but the massage parlor is open 7 days a week. There were two guards on the outside monitoring the cameras on the property and signing customers up for massages (if you’re not there by 11am, you won’t get in before they close at 4:30pm) . Inside, the inmates run the show. While I desperately wanted to ask my masseuse what crime she committed, I was only allowed to say hello (swa-dee-kaa) and thank you (cob-coon-kaa).

I found out the hard way about Thailand’s restricted alcohol sales. When I arrived to the grocery store, I wondered why the wine section had chains blocking  it off. Are they remodeling? Maybe restocking? I’ll just grab this one that is within arm’s reach. When I set the bottle down at checkout, the cashier had a confused look on her face, said “No”, and pointed to her watch. Well that’s odd.

When I got home, I googled and found out alcohol can only be sold from 11am-2pm and 5pm-midnight. So I can get drunk in the morning and at night, just not in the afternoon? Upon further research, I learned this law is in place to deter high school students from trying to buy alcohol. The thought is high schools can get out as early as 2pm, and by 5pm the kids should be home with their parents. I’m not entirely sure how fool proof the system is, but interesting none the less.

On Sunday, I rented a scooter for the day as there were a couple of things I wanted to see outside of the city. Mind you, I’d only driven a scooter a couple of times back in college prior to this rental. The advice I received Saturday night from a fellow American who now considers Chiang Mai home was, “Just focus on the cars in front of and on the side of you. Don’t worry about the cars behind you.” Ok. I think I can handle that. 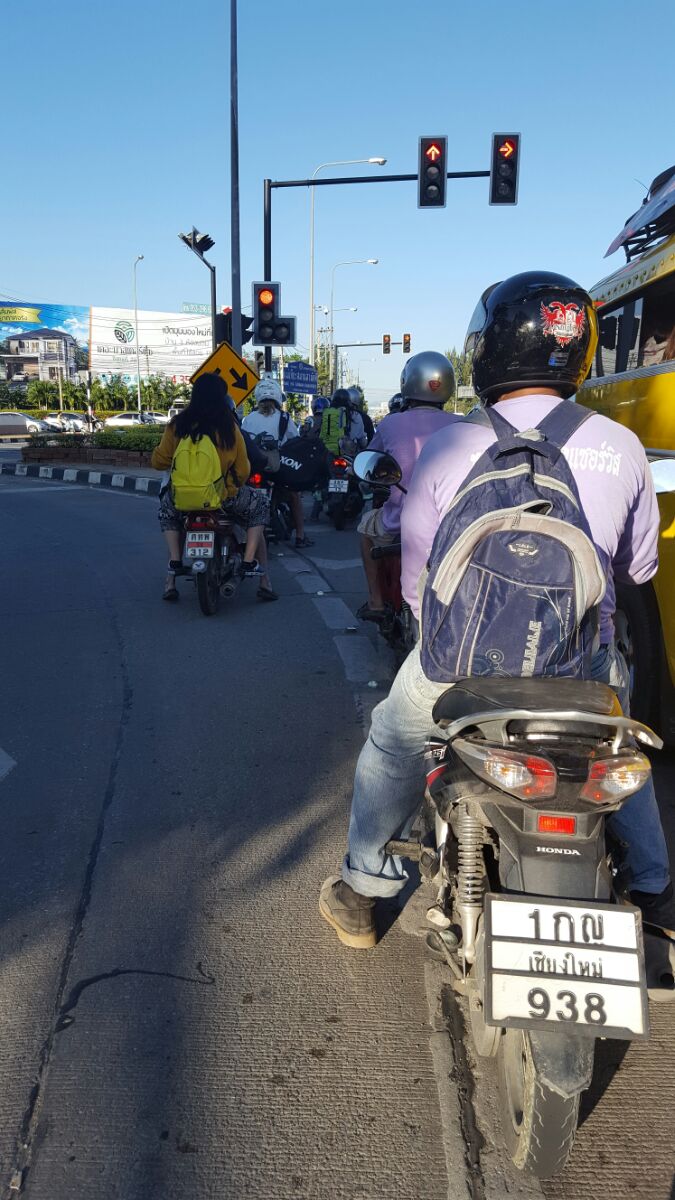 During my 30 minute drive out to Royal Park Rajapruek (botanical gardens), I drove on the wrong side of the road three times. There is a 62% chance that I die today. Royal Park Rajapruek was not as great as the reviews made it sound. Maybe I am too hyped up from the scooter ride to fully enjoy the park. It was cool that each section of the garden was designated for one country’s native plants (India, Nepal, Vietnam, China, and Thailand). I only spent about an hour and half there. 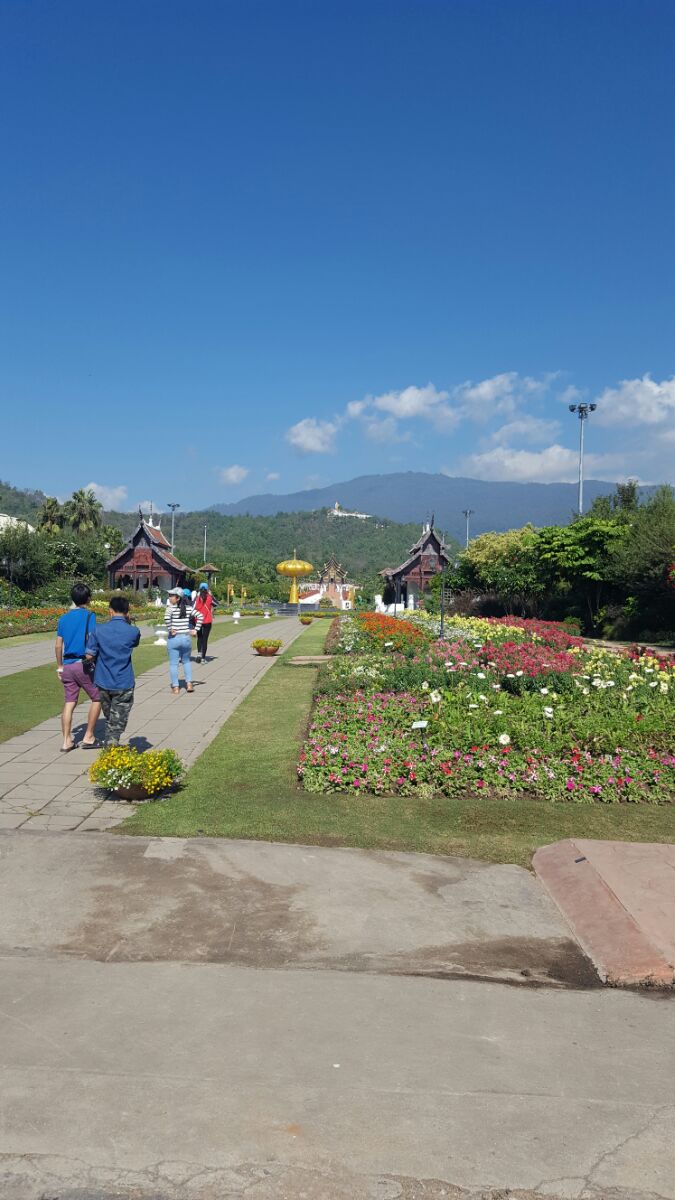 The summit of Doi Inthanon was located 100km from Royal Park Rajapruek. The first 54km were mostly on highways. I followed what other mild-driving scooters were doing in the beginning. So I drove on the shoulder of the road; at the few stoplights, I drove in between the cars to gather up to the very front; after getting gas on the other side of the road, I purposefully drove on the wrong side of the road to the next cut through, rather than backtrack on the correct side of the road. I caught myself giggling quite a few times during the journey. So. Much. Fun! 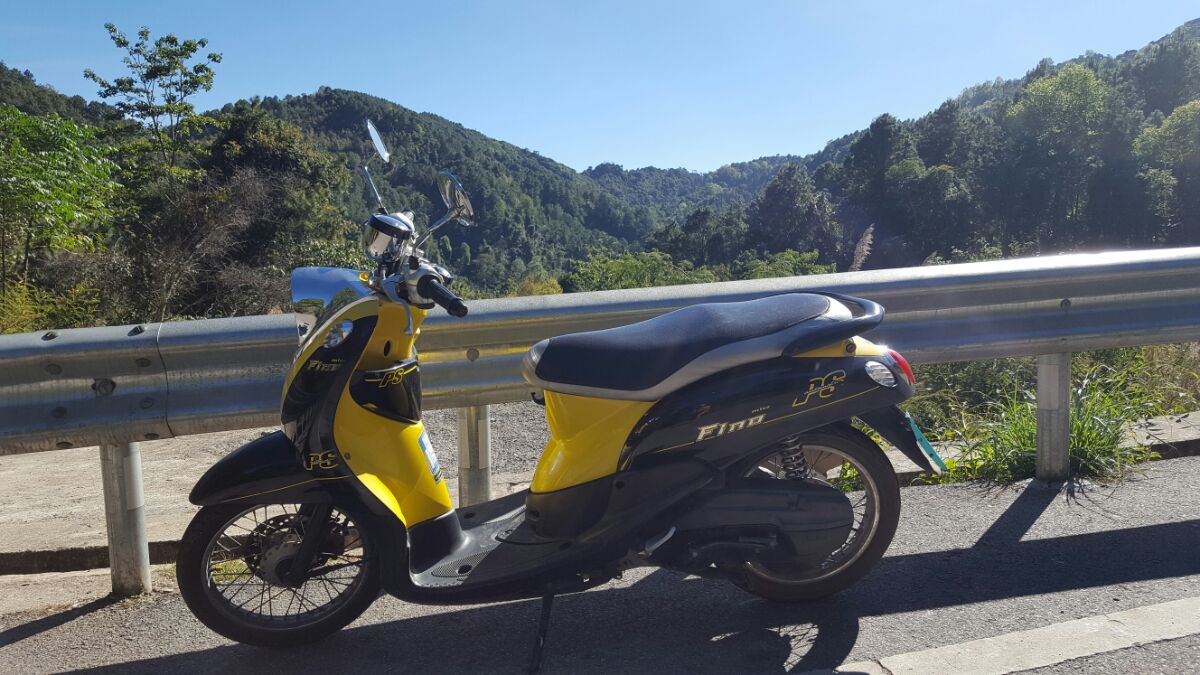 The last 46km were windy, curvy, mountain roads, albeit paved. While there was one lane going in each direction, that didn’t stop other drivers (scooters, trucks, cars, you name it) from passing into head-on traffic. I’m pretty sure I forgot to breathe for a couple of those. There were definitely some steep sections of the road where I wasn’t sure my scooter was going to make it up. I may have to flag down one of these trucks and throw the scooter in the back! An hour and a half after leaving Royal Park Rajapruek, I made it to the summit of Doi Inthanon and unknown to me prior, it’s the highest point in Thailand! 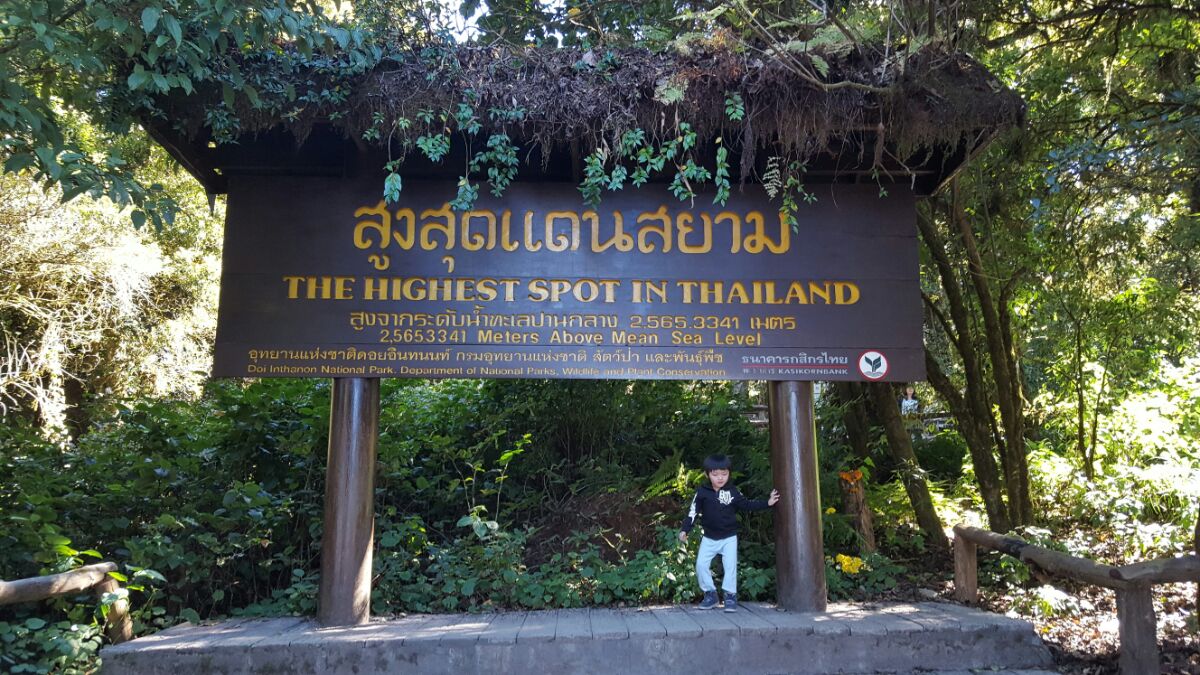 The drive back to Chiang Mai was an absolute blast. I figured out how to really lean into the curves on the way back down the mountain. Once I got back on the highway, I realized there was no speed limit.  Imagine Germany’s Autobahn, but on a scooter! I was only able to get the scooter up to 80kmph before the wind really started blowing me around. I weaved in and out of traffic, passed quite a few vehicles in the real lanes, drove on the dotted line in between cars, and shared a lane with a truck. Basically everything you’re told NOT to do in America is allowed here! As with Germans, the other drivers are just way more aware and almost predict what you are going to do next so contrary to popular belief, it’s rather safe.

Upon arriving back at my condo still alive, I realized two things. 1. I’m pretty sure I had a grin on my face the entire day. 2. I forgot to put sunscreen on. Ouch. Who knew you could burn the top of your hands and the inside of your elbow?! 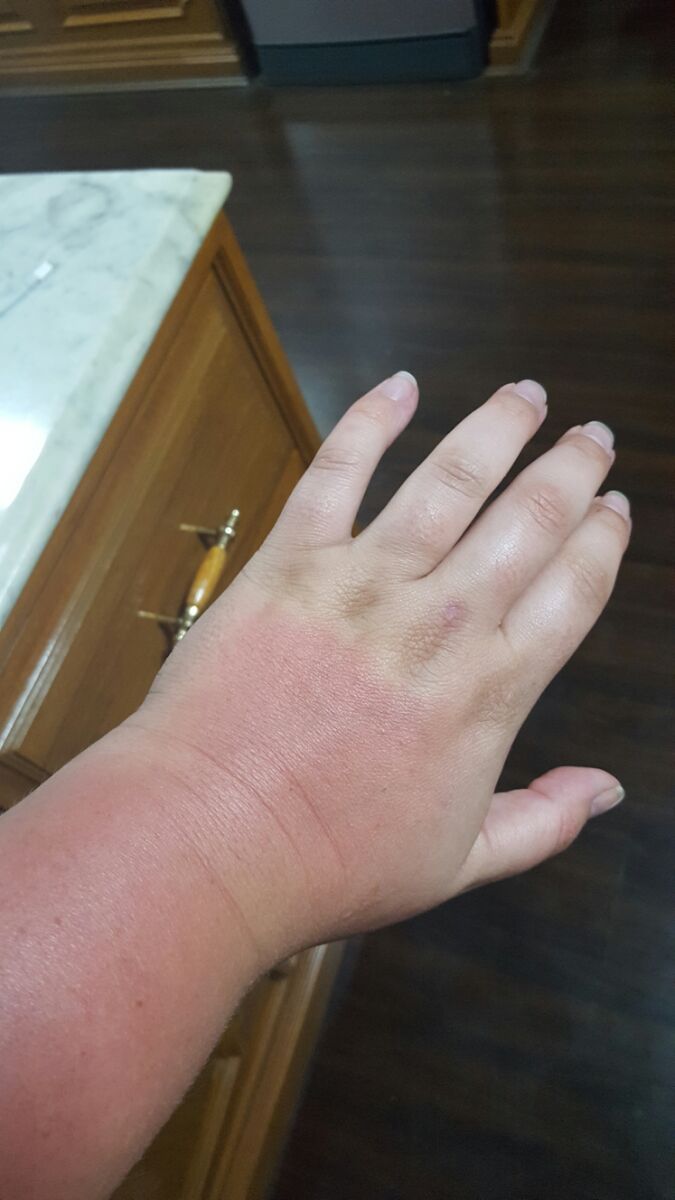 The night ended by having dinner with a fellow American (also met at the pub crawl) and trying to gather ideas on how to make this travel thing long term once the family goes back to America. While I have some ideas brewing, putting them into action and being successful is a whole other ball game.