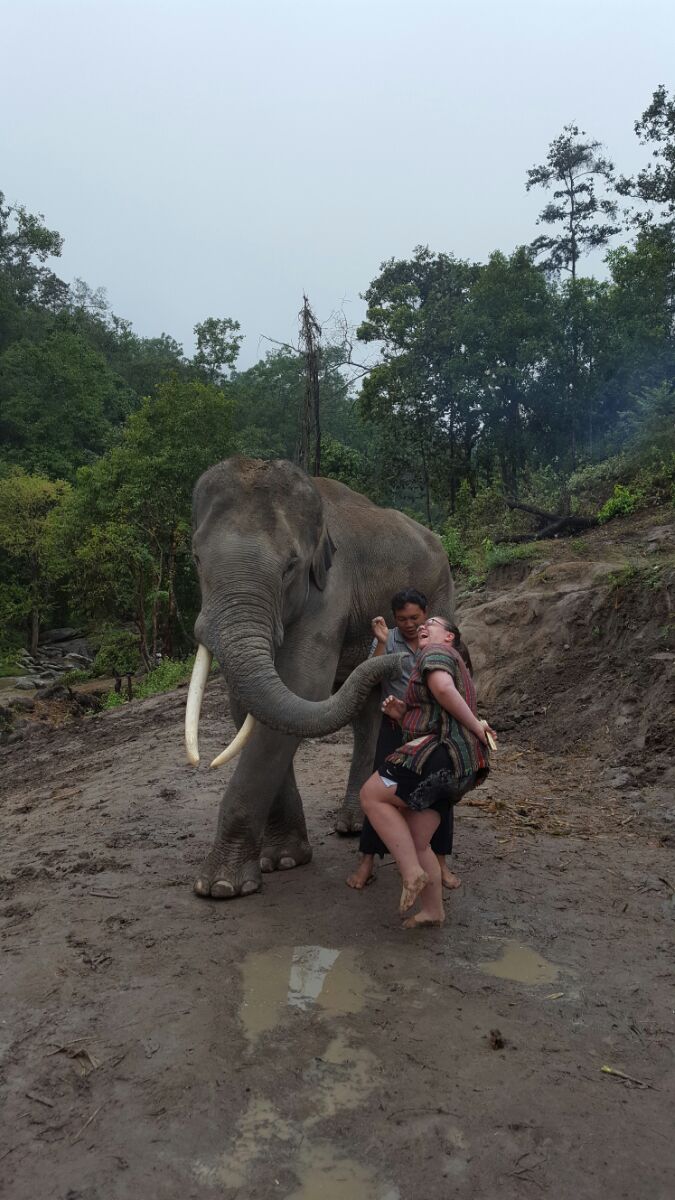 Parks are few and far between in Chiang Mai so when I finally found one with a playground, I was super pumped to take the kids there. Nong Buak Haad Public Park is located in the southwest corner Old City so we had to take an Uber there. Unknown to me at the time, Chiang Mai had a national holiday on Monday so the playground was absolutely packed with locals and expats alike.

About 15 minutes in, Chloe came up to me and said she needed to use the toilet. We found a public restroom which you had to pay to use (3 baht which is the equivalent of 8 cents). As with most indoor places here, we had to take off our shoes before entering, yet there was standing water on the floor due to poor drainage and the use of sprayers (toilet paper isn’t allowed in toilets here so most places only have sprayers). I don’t even want to think about the actual stuff we were walking in… And to top it all off, this was a squatting toilet perched on a two foot ledge… So I am standing in who knows what, with Hunter on my hip, and trying to explain to a 4 year old how to use a squatting toilet. What. An. Experience.

I found UN Irish Pub which shows NFL on Monday, Tuesday, and Friday nights so I headed there Monday night to watch the Broncos games (what a poor performance). This pub also shows NHL, NBA, English Premier League (soccer), Champions League (soccer), and rugby. I chatted with the manager and said if he showed the Broncos game every week, I’d be in there. Due to the five other sports he broadcasts, he only shows four Sunday NFL games. I just looked at the lineup for this coming week and the Broncos made the cut! 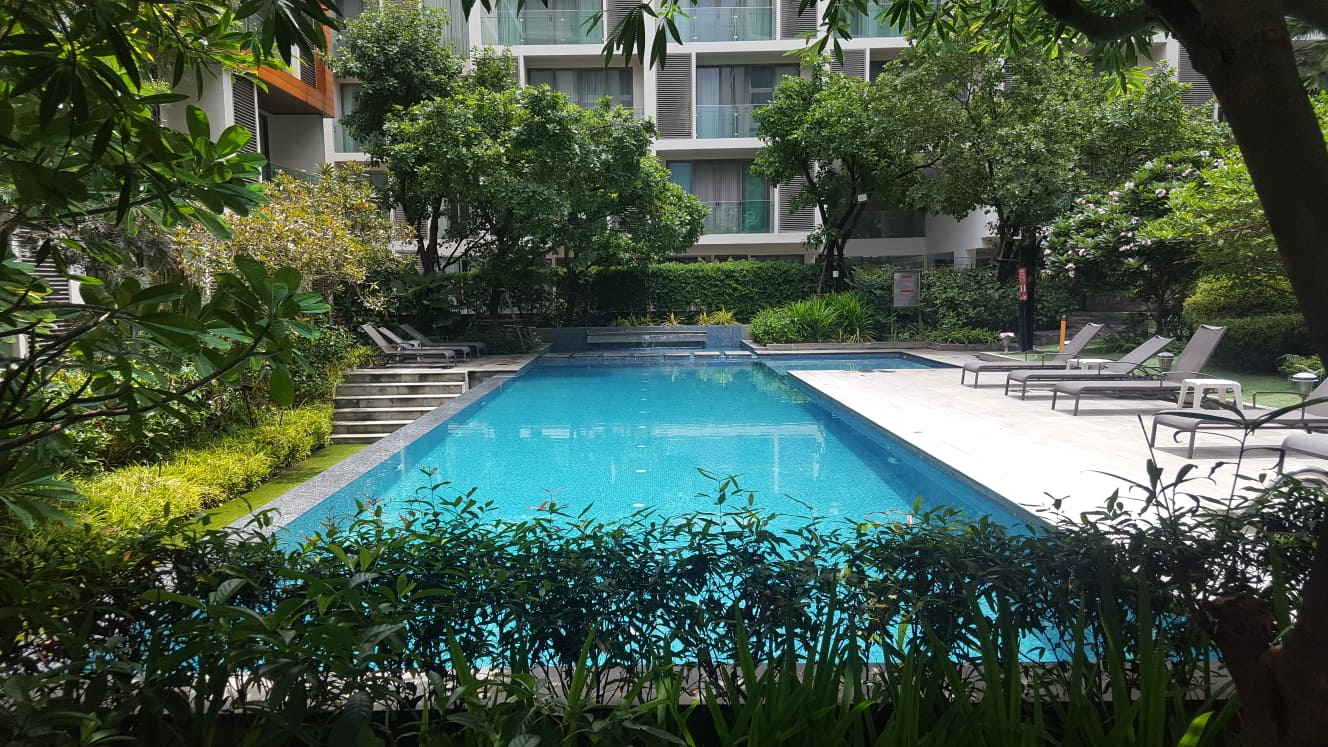 The condo that the family is living in has a pool which offers both a five foot area as well as two sections of two foot areas. Everyday that I’ve been with the kids, I’ve tried to get Chloe to go into the deep end so she can actually swim around in her lifejacket. This was met with fierce resistance. On Thursday, she was swimming with two sisters from Canada who are also living in the complex through January. The 7 year old asked Chloe if she wanted to go swimming in the deep end and she replied, “Ok! Will you help me?” Are you kidding me? I’ve only been asking you twice a day for 10 days to do this and the first time Emma asks you, you say yes?! Apparently you’re never too young to succumb to peer pressure. 🙂  As I anticipated all along, Chloe had an absolute blast in the deep end. I had a surge of pride and joy go through my body while watching her accomplish this. My smile might have been bigger than hers. Is this what having kids feels like? 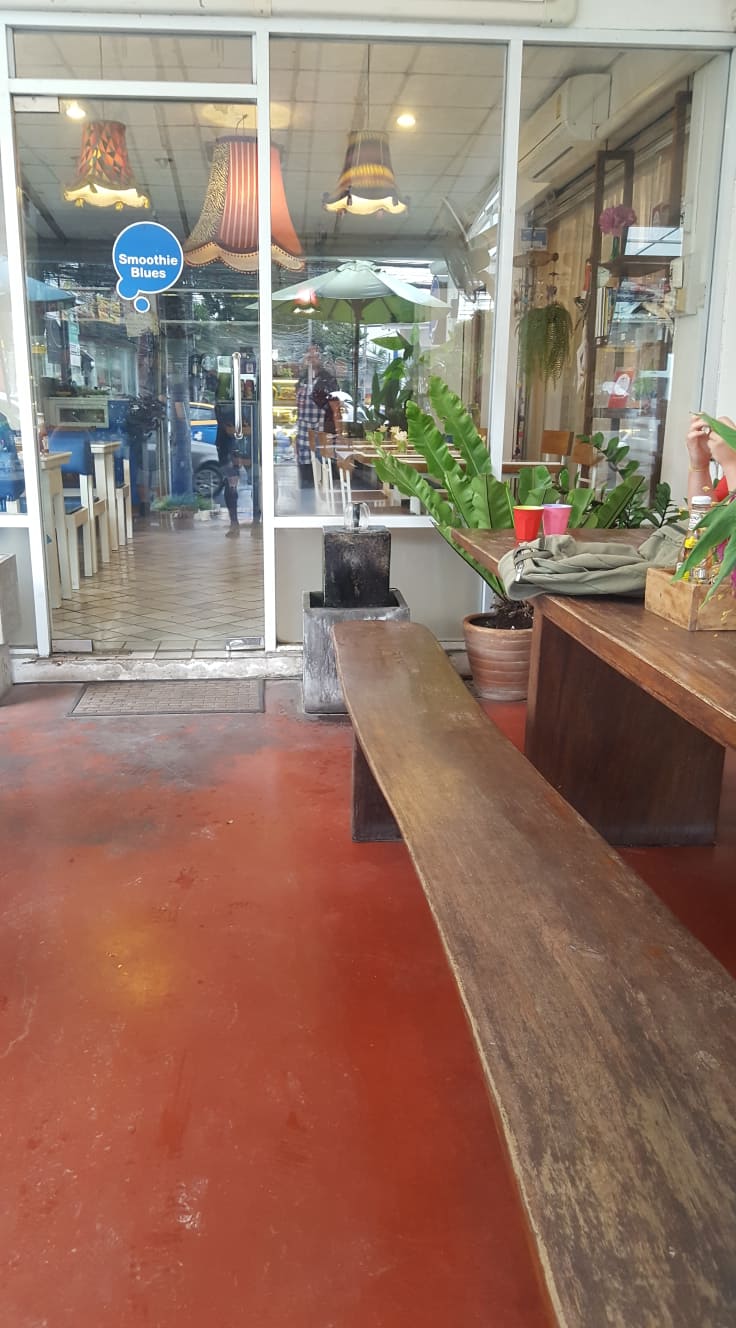 We celebrated by getting a turkey with cranberry sauce sandwich and French fries for lunch from Smoothie Blues. They gave us three ketchup packets. I tore open the first one and squeezed it out onto my plate. Chloe lit up and said that she wanted some on her plate too. Now, I absolutely LOVE ketchup. I put ketchup on everything (eggs, tacos, etc.). So I was at this dilemma as there were only two packets remaining for about 30 more fries. My love for ketchup overtook my brain so I told her there weren’t any packets left and we would have to share what was on my plate. When she looked down to eat, I snuck the other two ketchup packets into the to-go box with the remaining fries. I enjoyed every bit of that hidden ketchup each time she wasn’t looking up. Sorry kid, but I’m not about to share that delicious Heinz ketchup.

On Saturday, all five of us spent a day in the jungle with elephants. We rode an hour and a half from Chiang Mai to the jungle in a songthaew with five other people. Songthaews are the form of public taxis over here. Imagine a red pick up truck, with a topper on the back, and two benches and hand rails within the topper. That’s a songthaew. 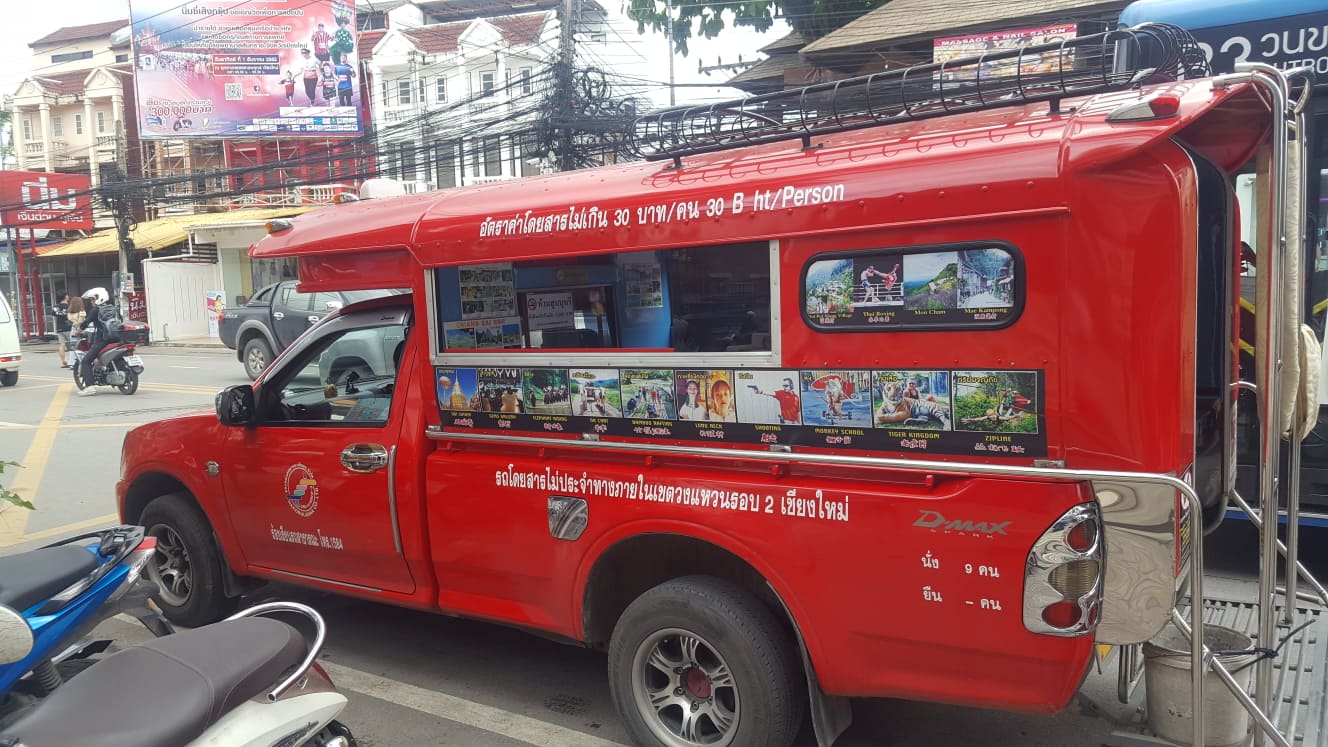 We somehow smashed 7 adults, one preschooler, and one car seat with a baby into a songthaew for 90 minutes each way. It was raining that day so we had to walk the last 600 yards to the elephants because the dirt/mud roads were getting too wet. They were concerned their trucks wouldn’t be able to get out if they kept on driving. Well, this last 600 yards was about a 55 degree downward slope with a hefty drop off on the right side. We started walking really slowly and about 100 yards in, my sandals lost traction and I wound up on my back with our backpack covered in mud. I giggled, got back up, and continued the descent. Another 100 yards in, and it happened again. This time, I laughed hysterically, took off my sandals, and made it the rest of the way down barefoot with a guide holding onto my arm.

Just when I thought we’d made it to the elephants, I saw that we had to walk across a 15 foot log that was placed over a river with a makeshift hand rail from a nearby tree. Yep, I’m definitely not in America! We spent the next four and a half hours feeding, bathing, and interacting with the elephants. One elephant was trained to give kisses (he placed the end of his trunk on you and blew air out) and I got a big ‘ol smooch on my mouth. It was sloppier than I anticipated. I successfully completed the hike up with no falls! Fun Fact: I was the only person out of the big group of 30 that fell. Neither the 70 year old lady nor Brittany with Hunter strapped to her front fell. I’ll blame my sandals for this one.

Today (Sunday) was spent sleeping in, doing word puzzles, taking a nap, and exploring the Sunday Night Market (Walking Street) in Old City. They shut down a 1.4km stretch of road and locals sell their hand-made/home-grown products. I saw clothing, ceramics, fresh fruit, magnets, shoes, purses, keychains, luggage, and everything in between. This market occurs every Sunday night and is a major event for them. They even played their national anthem at 6pm over a public loud speaker.