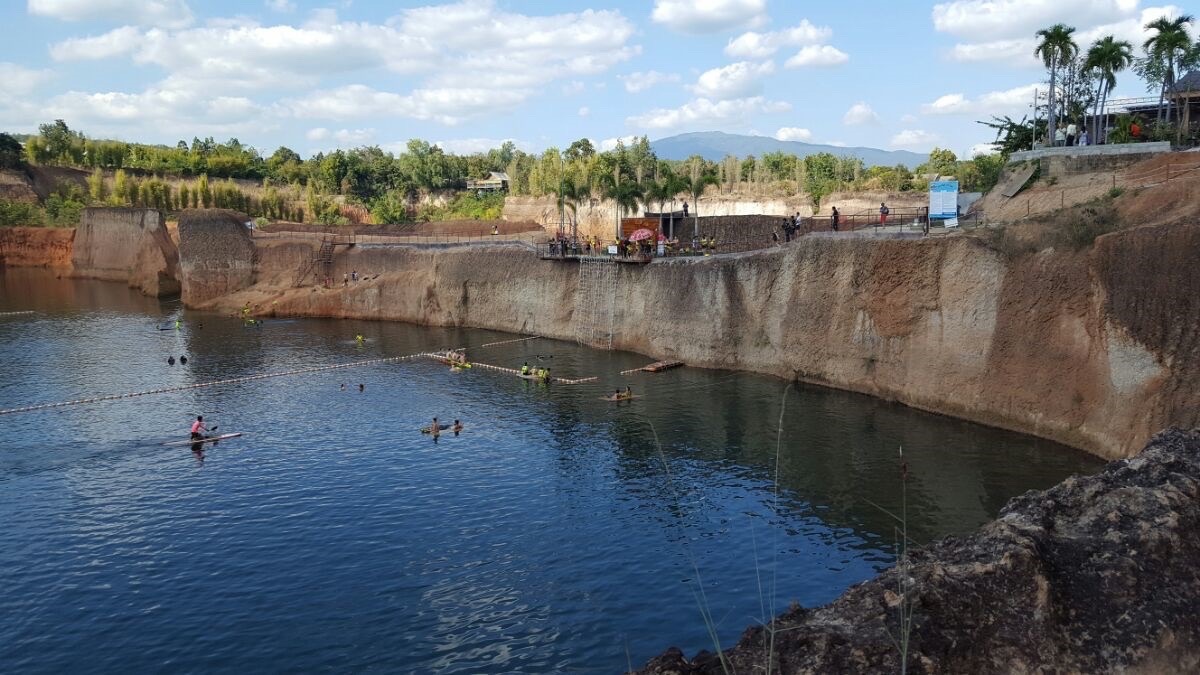 Have you ever burnt the inside part of your elbow? I don’t recommend it. Do you know what’s not fun to do when you have sunburnt arms and legs? Have children climb on you. In a matter of 48 hours, I managed to go through an entire bottle of aloe vera. I’m now happy to report my sunburn has turned into a tan and only my nose is peeling! 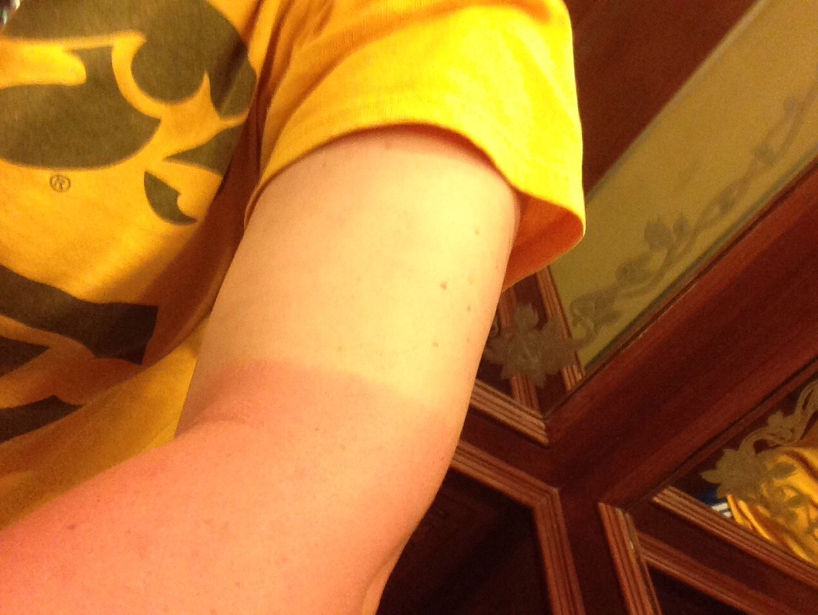 I’m also happy to report Chloe hasn’t had a meltdown in two weeks! Either she was testing me to see what her boundaries were or she was still dealing with the big change of living in Thailand. Or possibly a bit of both. Either way, it makes for much more pleasant days when she’s not hysterically crying/screaming/kicking over nothing.

Tuesday night, I went out with an Iranian German friend for her birthday. We started the night off by going to a ladyboy cabaret show near the Night Bazaar. Read that as transgendered females performing a cabaret show. Grandma, you should stop reading this post now. Ladyboys (what they prefer to be called) are very common here and this show occurs every night of the week. 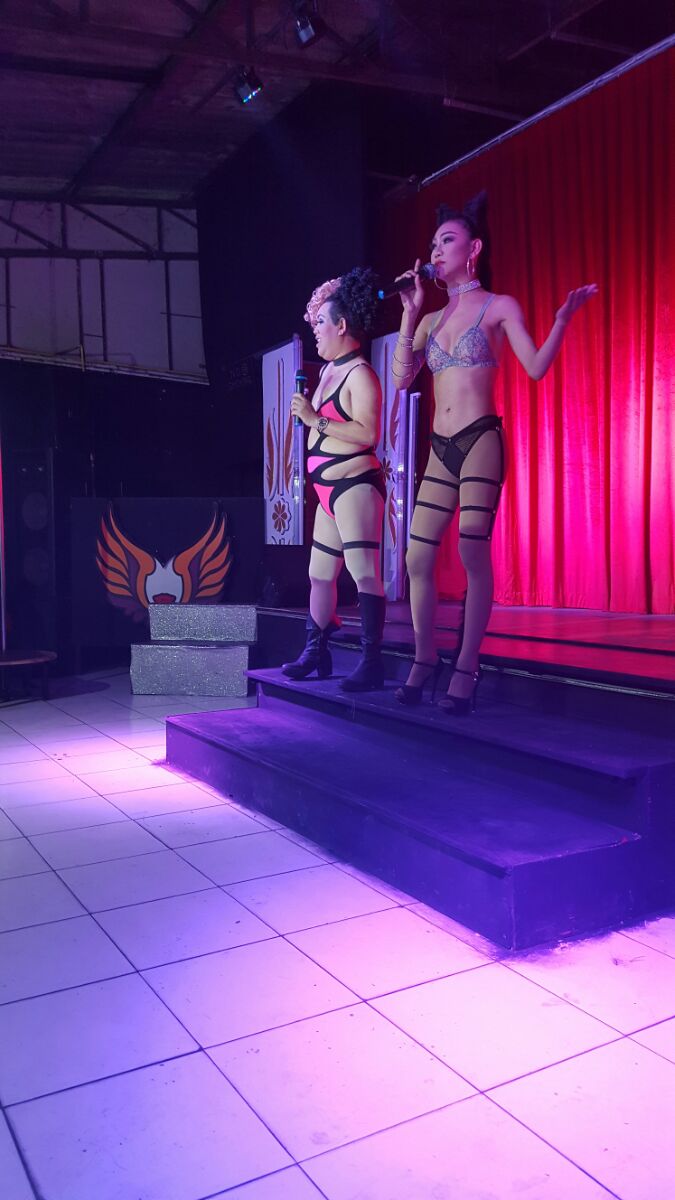 There was a wide range of performances as well as performers. Some have had surgeries done. Others are just on hormones. A few still look like men, but have on makeup and dress in women’s clothes. It was quite an experience. Only in Thailand… 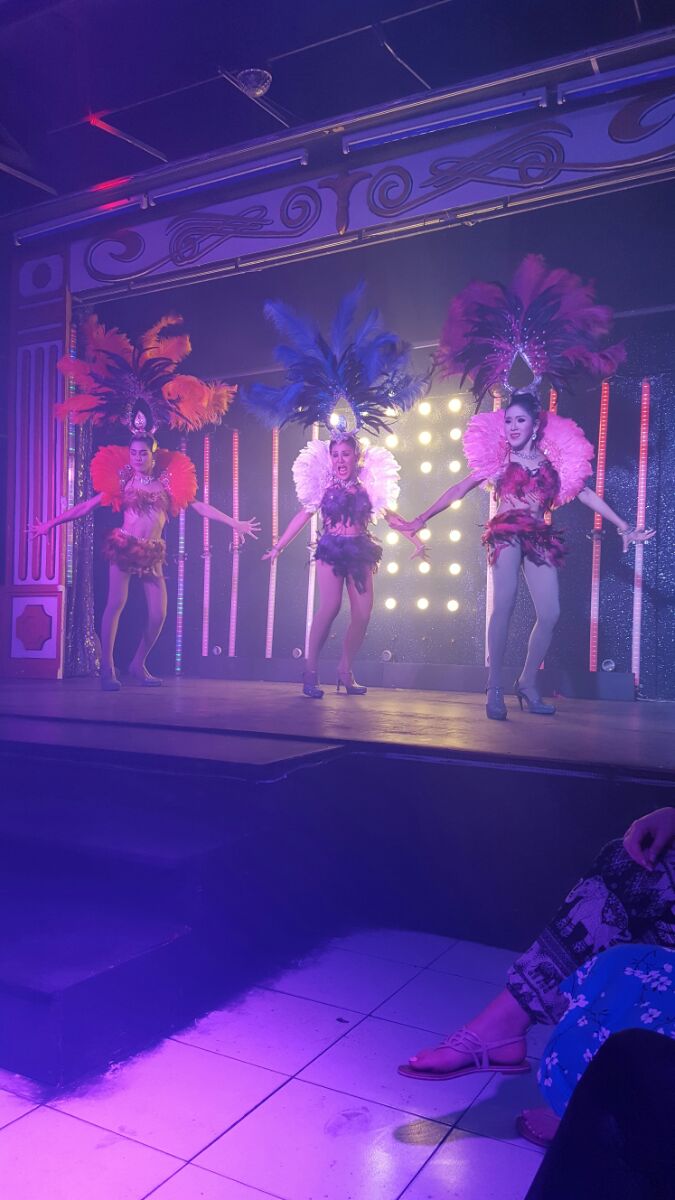 From there, we went to Zoe in Yellow until they turned the lights on at midnight. Everything closes at midnight here. Or so I thought… Turns out, there are two places that stay open later. First we went to Spicy, which is a club that stays open until 2am.  Once the lights came on at Spicy, we then headed to The Living Room. When we got to The Living Room, the front garage door-looking thing was pulled 3/4 of the way down. Are we even in the right place?! It looks pretty deserted. We told the bouncer how many people were in our group. He then scanned the road (I’m guessing to make sure no cars/witnesses were around) and told us to go in. By go in, he meant crawl on the ground, under the garage door, and push open a regular door. Viola! There were probably 150 people in the bar. I had no idea on the outside it was that large and that noisy on the inside. Well played, Living Room.

After four glorious hours of sleep, I rented a scooter so Minnie (the Iranian German) and I could head up to Bua Thong Waterfalls. On the way to her hostel, I was caught in a check point by the Thai police and had to pay a fine of 400 baht ($11) for driving without an international license. 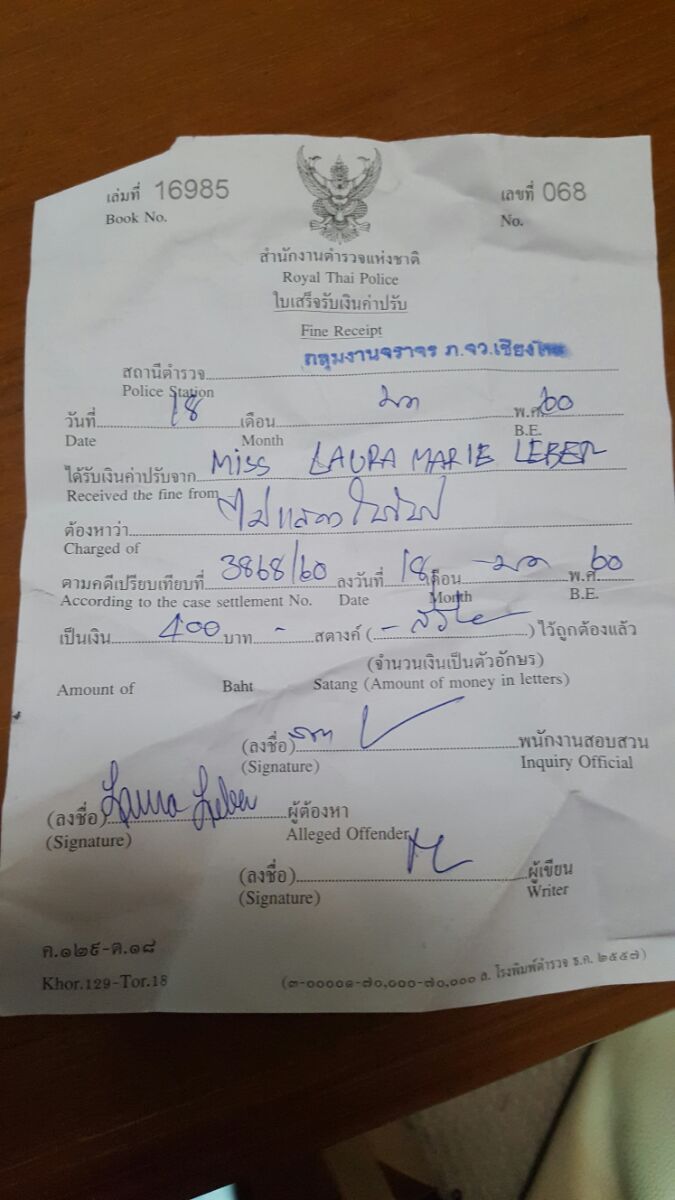 They were making anyone driving a scooter that didn’t look Thai stop and show an international license. I told them I didn’t have 400 baht on me with the hopes that they would just write me a ticket and I’d leave Thailand without paying it. Instead, the police said they would keep my scooter and keys until I went to the ATM. Needless to say, I miraculously found 400 baht in my wallet and went on my way. 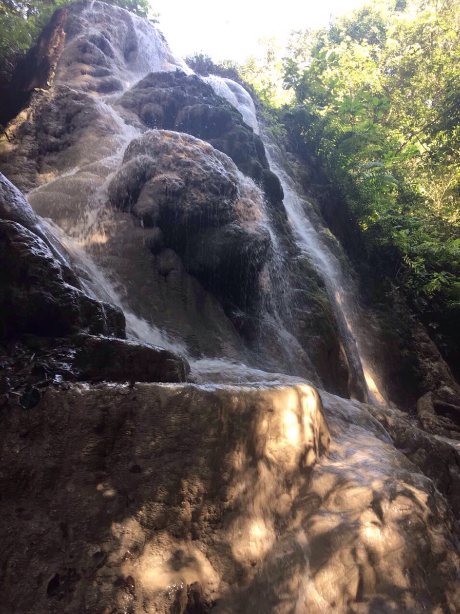 Bua Thong Waterfalls (also known as Sticky Waterfalls) is a little over an hour’s drive north of Chiang Mai. The rocks are made of porous limestone so even with water rushing over them, you have as much traction as on dry land.

I felt like an amphibian walking up and down the rocks barefoot.

Because it’s mostly a locals hangout, we only saw about ten other people during our two hours spent there. Rumor has it, this is the only waterfall of its kind in the world! 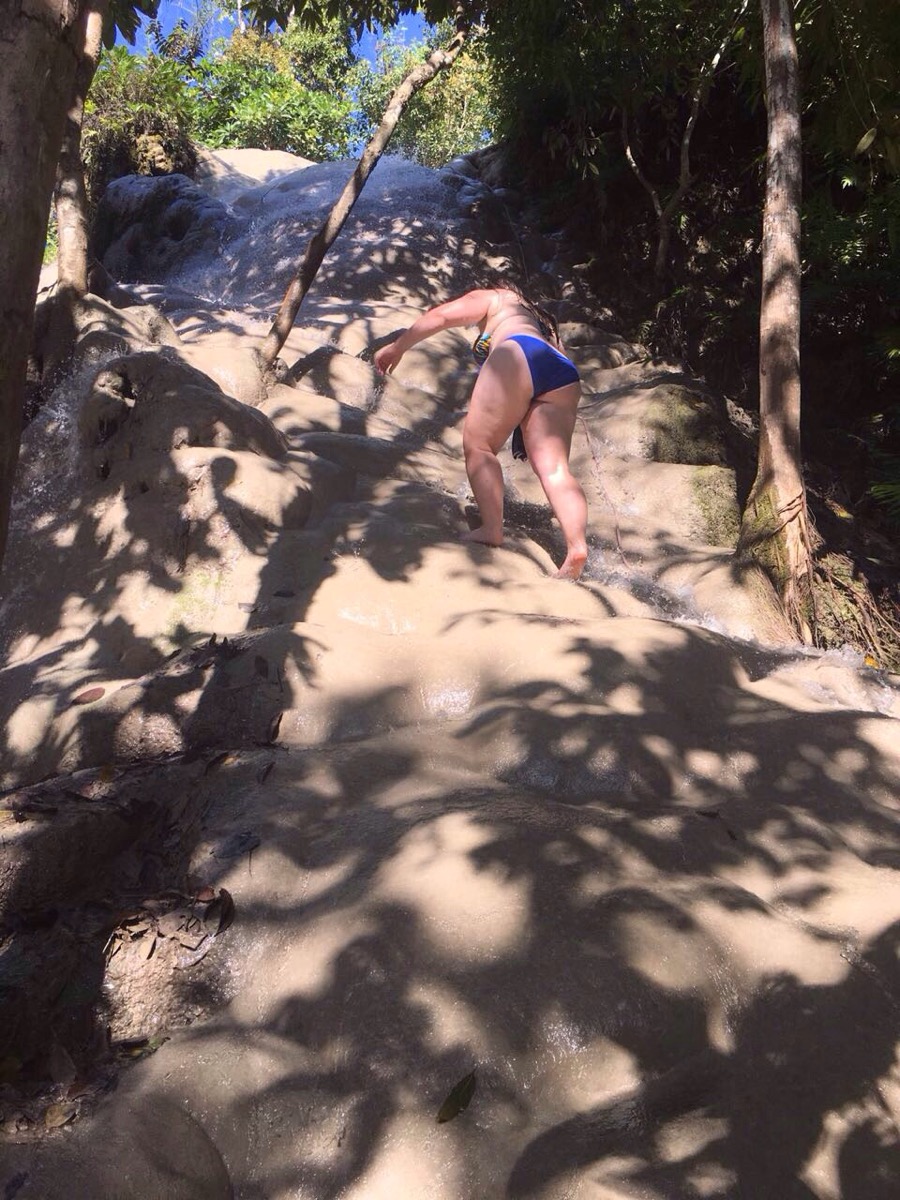 Thursday night, the family and I went to the Chiang Mai Night Safari. It’s a zoo where you ride in an open tram and get to see what the animals are up to at night. Before we hopped on the tram, we went to the highly advertised Tiger Show. The first three animals brought out were lions. I questioned my knowledge of lions compared to tigers for a good five minutes.  The translation must be a bit off. During the tram ride, we were able to get up close and personal with the non-threatening animals (giraffe, deer, antelope, and warthogs) as they were not caged up. They freely roamed around and were more than happy to stick their heads into the tram and take your food.

Saturday night, I went on the weekly pub crawl. The people I talked to on this pub crawl had all only been in town for 2 days or less so I really felt like an expert telling them where to eat and what to go see. I hung out with two Australians for most of the night and today the three of us went to Chiang Mai’s Grand Canyon. It’s essentially an old quarry site that has been made to attracts tourists.

There were four separate areas: an obstacle course on water complete with a blob; cliff jumping and floating on bamboo rafts; rock climbing; kayaking and laying on inflatable rafts. We opted for the cliff jumping at the Grand Canyon Water Park and floating on bamboo rafts section. Due to three recent cliff jumping deaths (one guy jumped on top of his friend, one guy didn’t know how to swim, couldn’t find details on the third death), the cliff jumping was a bit more regulated than I was hoping for as only one person can jump at a time from a designated area. However, it was still a blast and a day well spent in the sun outside of the city. 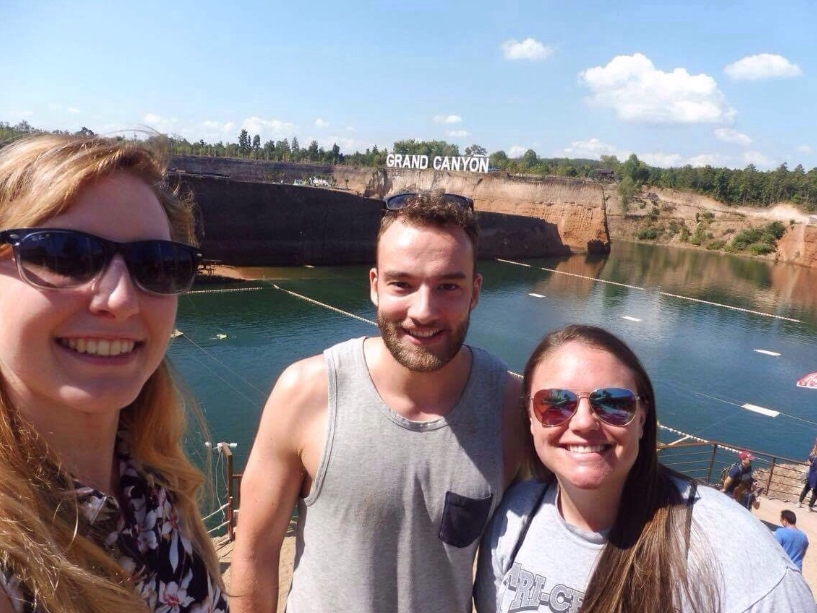 I am now entering my final week in Thailand. Can you believe it’s already been 7 weeks exactly since I left America?!