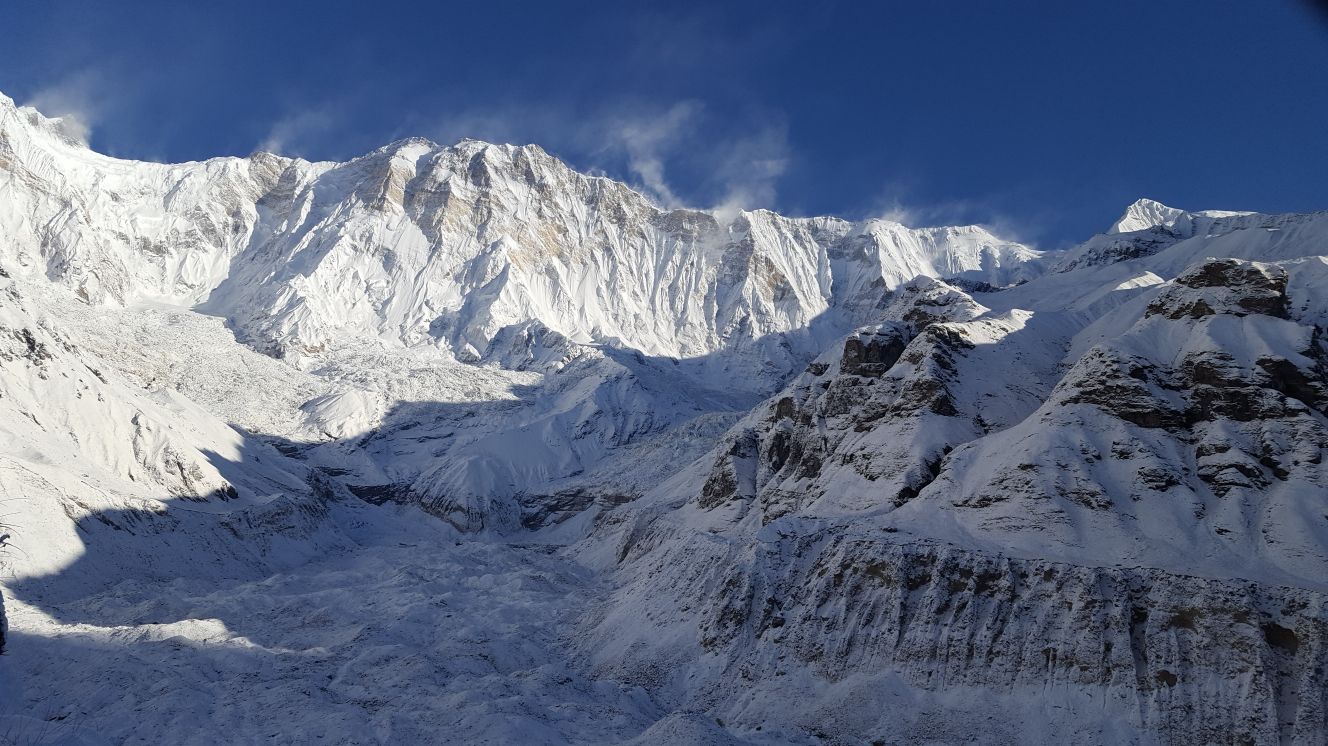 All of Thursday was spent making our way to Nepal. Our flight from Phnom Penh to Kuala Lumpur was uneventful. Our flight from KL to Kathmandu was a different story. The Nepalise men were very confused during the boarding process. They didn’t understand their ticket had a seat number on it so the stewardess had to show each one of them where to sit. We were two of ten white people on the flight and two of only four females. The men looked at Flynn and I as if we were aliens.

Where are all the women?! I feel like we’re about to enter a whole new level of male dominance.

When we arrived at the Kathmandu airport, again, there was an overwhelming amount of men and hardly any women around.

With so many men around, my chances of finding a husband have to be astronomically high. 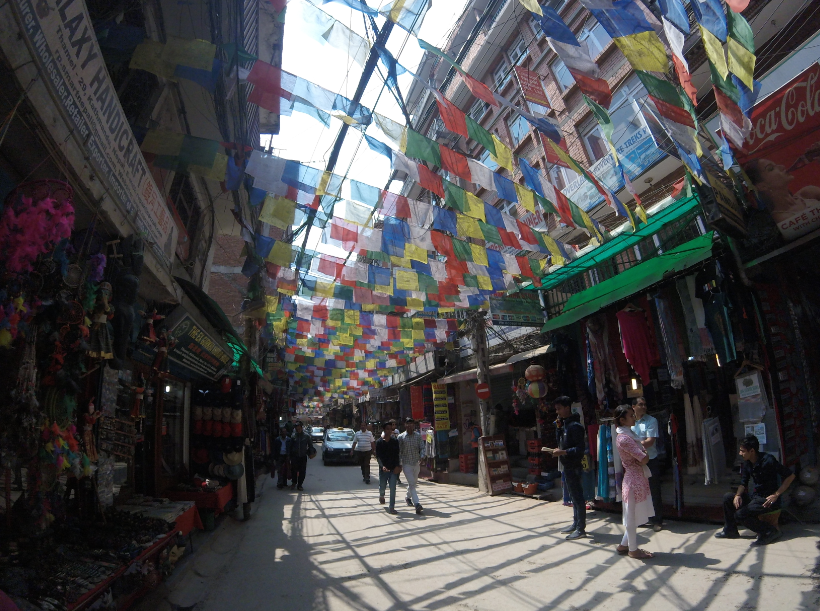 We arrived to our hostel (creatively named 8848 Hostel because you know, the height of Mt. Everest is 8,848 meters) and were looking forward to getting some sleep. Unfortunately, the walls and windows were super thin so I got maybe three hours of sleep. As Flynn described to her husband, Paul, the next morning, “It was like seven families and their dogs were having dinner in our room.” It was so loud that I got up to check that our windows were shut three times throughout the night…. and we were on the 5th floor!

After breakfast on Friday, Flynn and I headed out to get our two trekking permits. One hour and $40 later (each), we had our permits in our hands!

Is this really happening?!

The rest of the day was spent taking money out of ATMs (we have to carry all our money on us for the next 21 days), breaking down said money into small bills (the villages in the higher elevations typically won’t be able to break the equivalent of $10), buying gear (down jackets as the high has only been about 10 degrees in some of the higher elevations, Nalgene water bottle which perfectly connects to our water filter), and buying last minute items: 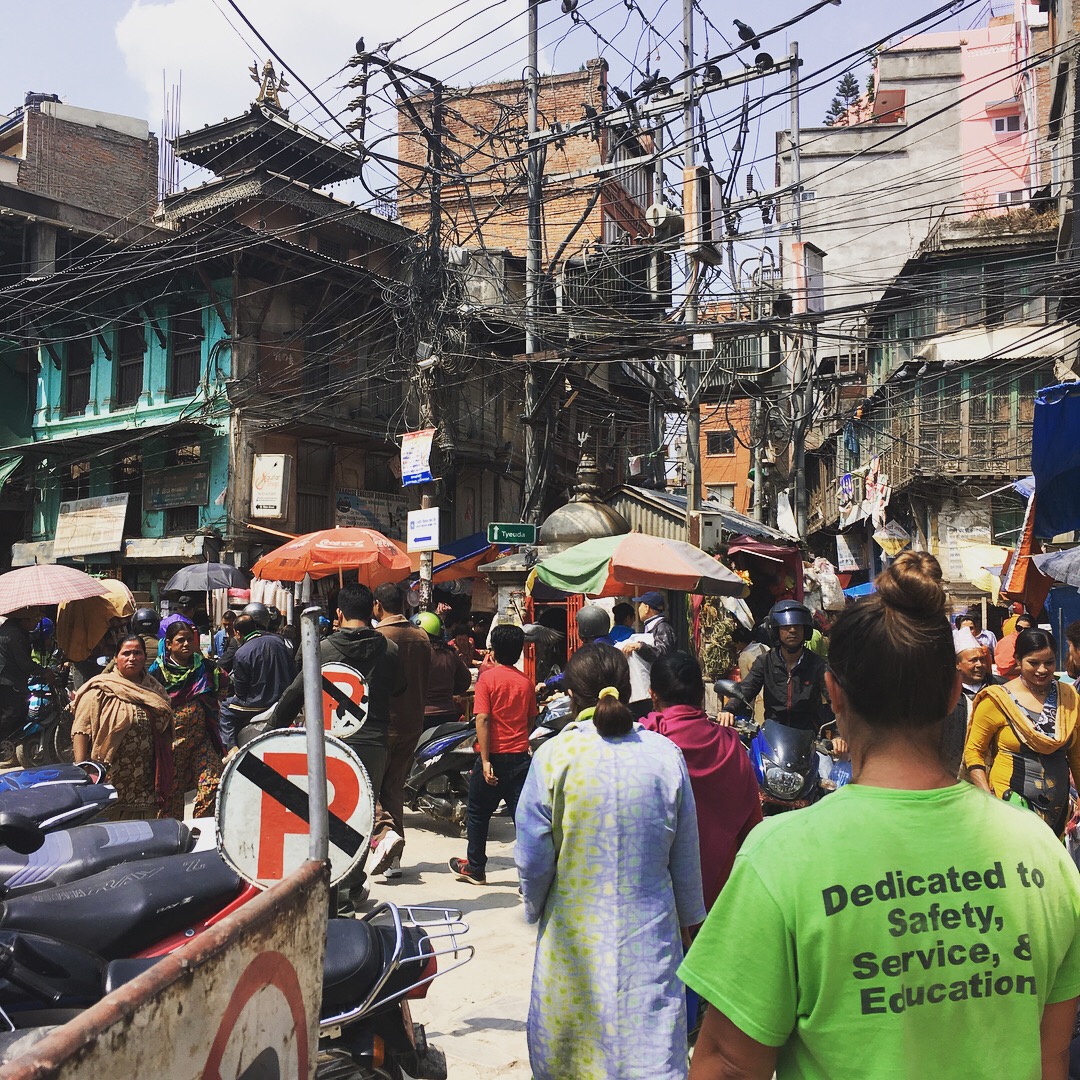 Our original plan was to hop on a bus Saturday morning to begin trekking on Sunday. After a full day spent walking around Kathmandu buying our necessary items, we felt we still needed one more day to get everything done and not feel rushed. Our main problem was money. Flynn was only able to take out the equivalent of $500 per day and we needed as least $630 to get us through three weeks. Then came the issue of breaking our money down into small bills. 1,000 Nepali rupees ($10) comes out of ATMs, but most items will cost between 100-500 Nepali rupees ($1-$5) while on the trail. We had been warned if you need to pay 200 rupees and only have 1,000 rupees on you, the entire village will have to combine their money to create your change or you’ll just be out whatever amount they are unable to scrap together. 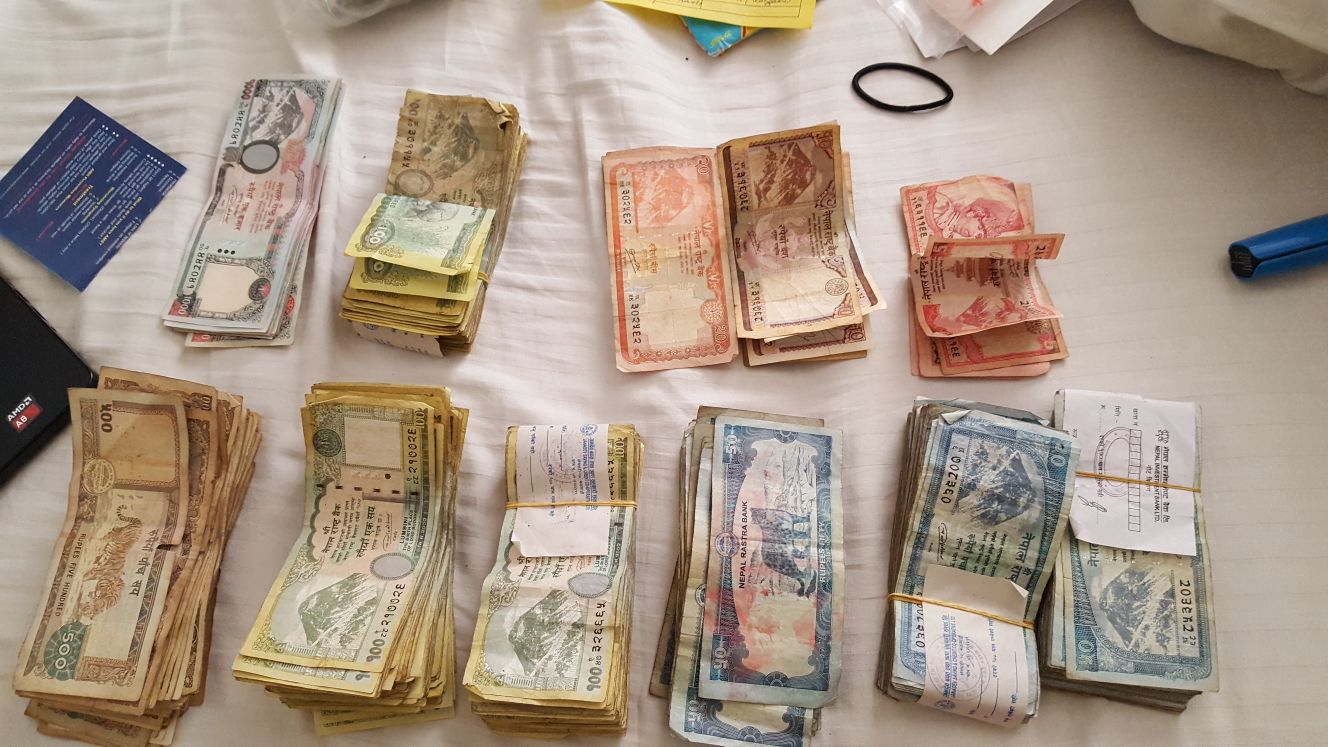 I first headed to a bank to get change, but they were only able to break down 20,000 of my 80,000 Nepalese rupees. After explaining why I needed the small bills, the staff member told me to come back the next day between noon-3pm and they would be able to break down most of my remaining money. We then decided to try our luck at a currency exchange as they are not allowed to charge a commission for their services. We quickly found out most currency exchange places were either unable or unwilling to break down more than a 1,000 rupees bill (I had over 60 that still needed to be converted).

We switched to a hotel Friday evening so
a) we could get a decent night’s sleep and
b) two friends from high school just so happened to be coming back from a trek in the Annapurna region and were also staying at the hotel.

Being raised in a town of 1,000 people, I am literally halfway around the world and hanging out with Nick Maguire from Treynor and Maureen Houser from Riverside. I mean, what are the chances?!

On Saturday, we headed back out to the streets to get the rest of our items. Once noon rolled around, we headed to the bank. The staff member remembered me right away (probably because I wore the exact same clothes as yesterday; trying to save my clean clothes for beginning the trek and another stash for when I return) and went into a back office. She emerged with a canvas bag in her hands, sized similar to a regular drawstring bag, and a security officer to stand next to me.

In a matter of ten minutes, I had changed out 45 of my 60 remaining large bills in exchange for stacks of 100s ($1) and 50s ($.50). Once the canvas bag was empty,  it was Flynn’s turn…. except I had cleaned the bank out completely… so we were back to square one to break down Flynn’s money. 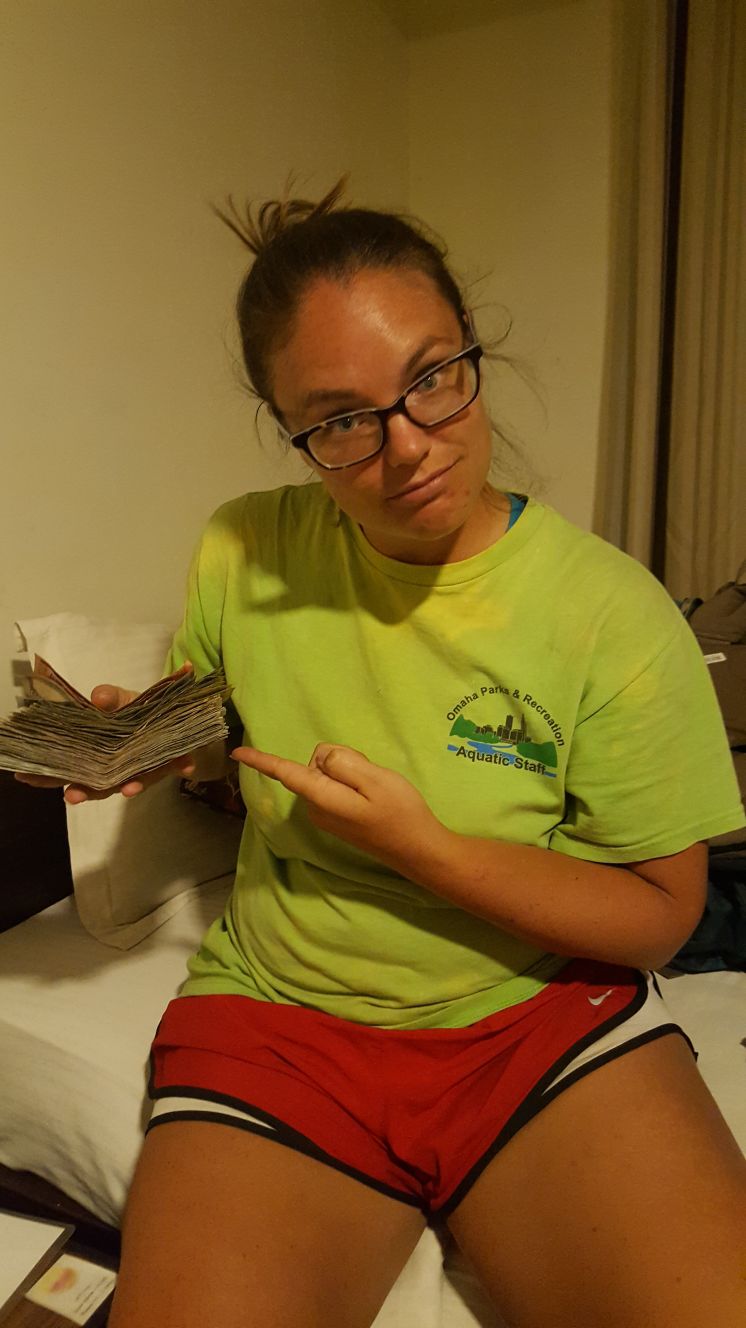 This specific bank was the only one we could find open on a Saturday (their Saturday is equivalent to our Sunday) so we spent the next three hours literally going into every single currency exchange place on two streets (there is one about every 20 meters) and just taking whatever amount they would break down.

By 4pm, we had arrived back to our hotel with 90% of the money converted. We spent one hour going through our gear, splitting up shared items, and packing everything we’ll need for the next three weeks into two 70 liter Gregory Deva backpacks, each weighing 35 pounds. The weight is definitely heavier than we wanted, but due to starting out at 2,624 feet and hiking as high as 17,777 feet, we have to carry warm, cold, and rain gear for the duration of our trek. 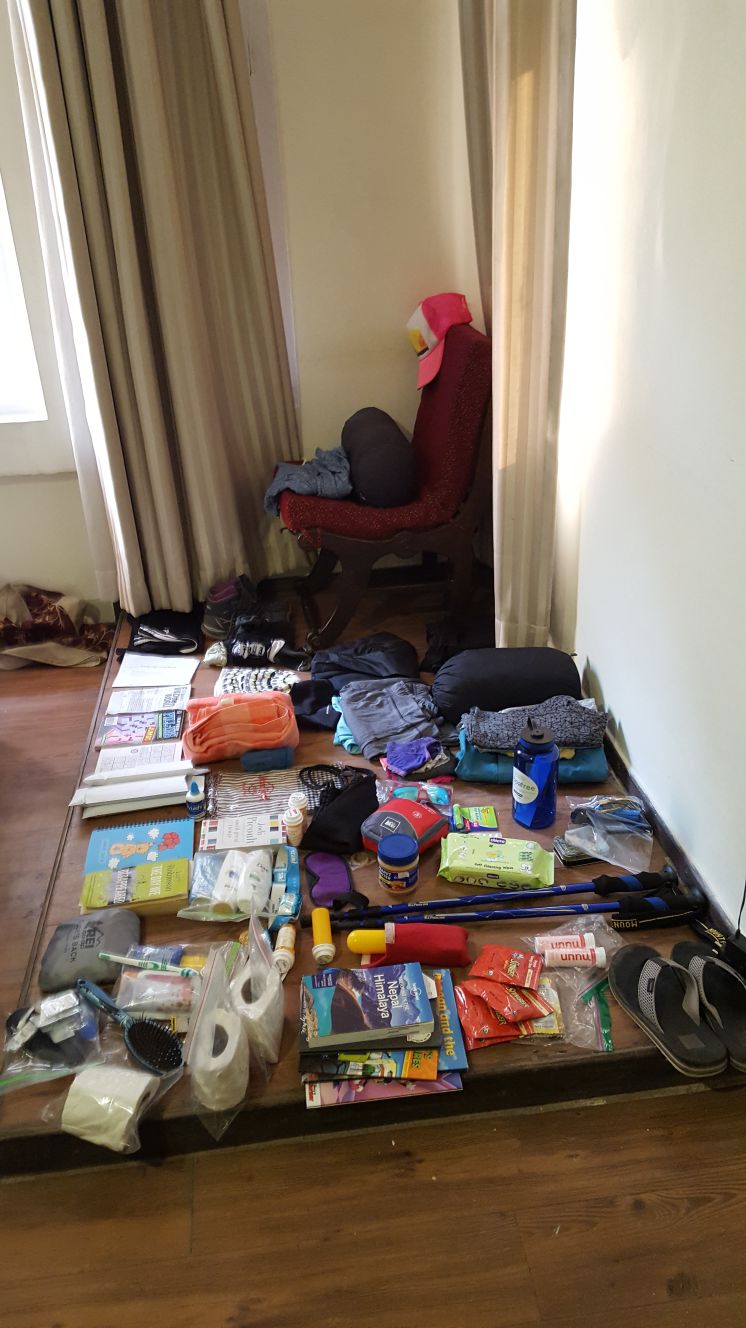 It is now Saturday night as I’m writing this blog. Tomorrow we will leave our hotel at 6am to catch our 7am bus to Besisahar. While it’s only 179km away, we anticipate it taking between 6-8 hours due to road conditions (still lots of destruction from the back to back earthquakes in 2015) and traffic. 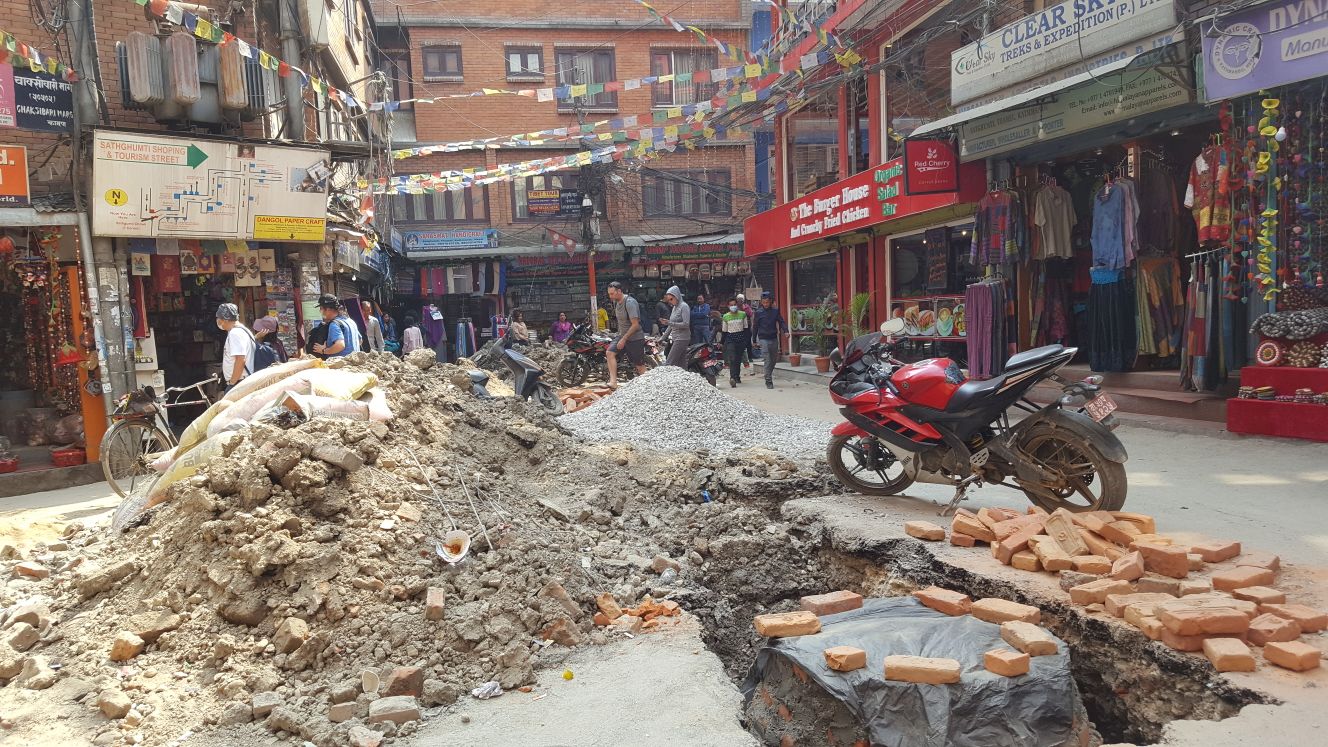 This will be the last blog for the next three weeks as I don’t anticipate having wifi and even if I did, I’m not about to add an additional 8 pounds to carry my laptop through the Himalayas. Plus, there’s a strong chance we’ll be without electricity in most of the villages once we reach a certain elevation. I do plan to keep an old school handwritten daily journal while on the trail and will type up all my thoughts and experiences for you upon my return to civilization.

Over the next three weeks, I anticipate using only my feet as my mode of transportation, being completely disconnected from the outside world, wearing only two outfits (one for hiking, one for hanging out in the villages at night), hiking an average of 7 hours per day, eating dal bhat twice a day every day, going to the bathroom outside more often than inside, and sleeping in a shack where you can hear a person fart three rooms down. So why am I doing this you might ask?! Because I’m about to see some of the most beautiful scenery on this planet, hike in the Himalayas with one of my best friends, and cross Thorong La Pass, the highest navigable pass in the world. 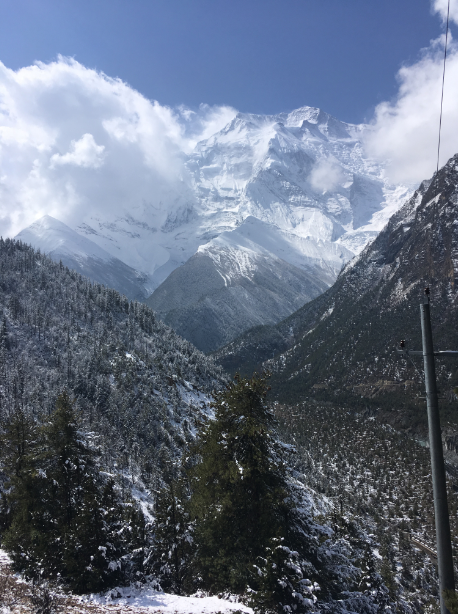