Touring the DMZ and a Poop Museum 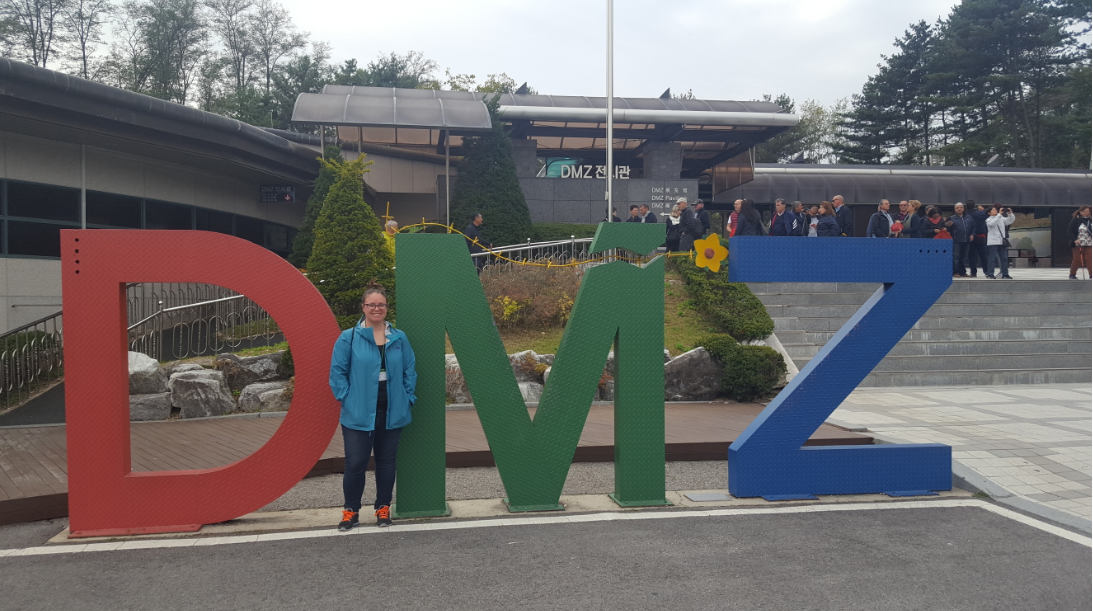 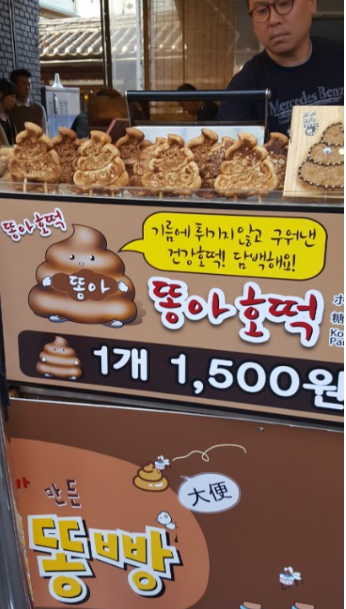 Life in hostels has been quite the experience. When I arrived at my first hostel, the reception desk was closed as it was 11pm. They kindly left my name on the outside door and written, clear as day, where my key was hidden.

Quite the security they have here.

I had booked an all-female 6 bed dormitory. Upon entering the room, the lights were all turned off and all five other beds had their privacy curtains drawn.

Is everyone sleeping or are they all out on this Saturday night? What’s proper hostel etiquette? Would I be an awful person if I turned the lights on? I can find my bed with the lights off, but not my locker.

I decided to play it safe. After heaving my 70 liter backpack onto the top bunk, I crawled into bed and snuggled up with it for the night.

Sunday was spent getting settled into my hostel (found my locker under the bed!), getting my Korean SIM card to work, buying groceries and a public transportation card, and familiarizing myself with the area. That night, I found one of my roommates passed out on the couch in the communal area on my 1am bathroom break.

Should I help her into her bed? Nah, she’s a big girl and she made it back into the hostel. She’s fine.

At 3am, I awoke to her phone ringing off the hook. Two staff girls, that occupy beds in my room, found the phone (it had fallen between the bunk and the wall) but were unable to silence it because it required a password. They couldn’t wake her up (tried shaking her, turning the light on, talking to her, etc.). When they answered her phone, it was her dad and they tried to explain the situation. He wasn’t understanding because he spoke Korean. One staff girl called her friend who knows Korean, placed the friend on speaker phone so she could explain the situation to the dad through two phones. After an hour of all this, I figured they could use some help and told them to just throw water on her. Sure enough, she came to but wasn’t even phased about the water on her.

My next accommodation was a hotel for two nights. The mattress there was about as comfortable as a box spring.

But it’s your own space with nobody waking you up!

Next was a hostel that smelled like a dirty hippie and had numerous mosquitoes in the room. I was so grossed out I didn’t even unpack anything. Good thing I had only booked one night there. I briefly chatted with one of my roommates upon arrival. She left for about an hour and when she came back, she was off her rocker. As in, legit crazy. What happened to her?! Did she take drugs or something? Needless to say, I didn’t sleep a wink that night.

My current hostel comes with two out of my nine roommates who enjoy talking as loud as they can across the room from each other until 1:30am with the lights on and then getting up at 6am and starting all over again. This morning I was Skyping with Barb down in the lobby. She made a comment about how she could hear the people in the background talking. I gave her one guess as to who it was 20 feet away….. This is why I’m sleep deprived and cranky! 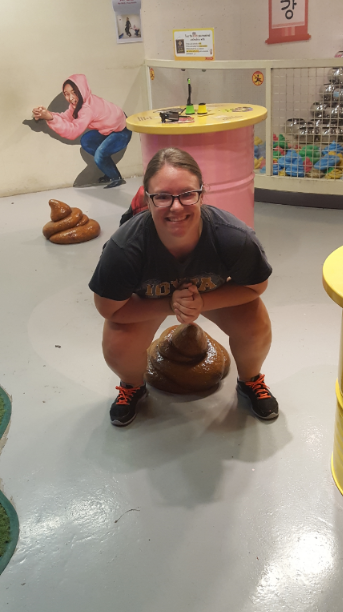 Outside of hostel life, I was able to see three really cool things in Seoul this week. On Monday, I visited Poopoo Land. Yes, it is exactly what you think it is…. A museum dedicated to poop, farts, and the digestive tract. Best $5 and 30 minutes I’ve probably ever spent! On each step in a set of stairs, a different fart noise played. The way out was to go through a digestive tract… cramped curvy space, obstacles to overcome, and a 70 degree drop slide as the finale.

On Wednesday, I toured the Demilitarized Zone (DMZ) and Joint Security Area (JSA). The DMZ is on the 38th parallel, stretches coast to coast of Korea, and has a “peace area” two miles on either side of the line. I was able to go into the 3rd tunnel, out of 4, that South Korea had found built by the North as a way to invade. They estimated this tunnel had the capability to move 30,000 North Korean soldiers into the South within an hour. While they have blocked this tunnel off from the North via three cement walls, there were still gas masks hung on the wall every 100 meters. How confident are they in their security measures? I went to Dora Observatory where I could see into North Korea. 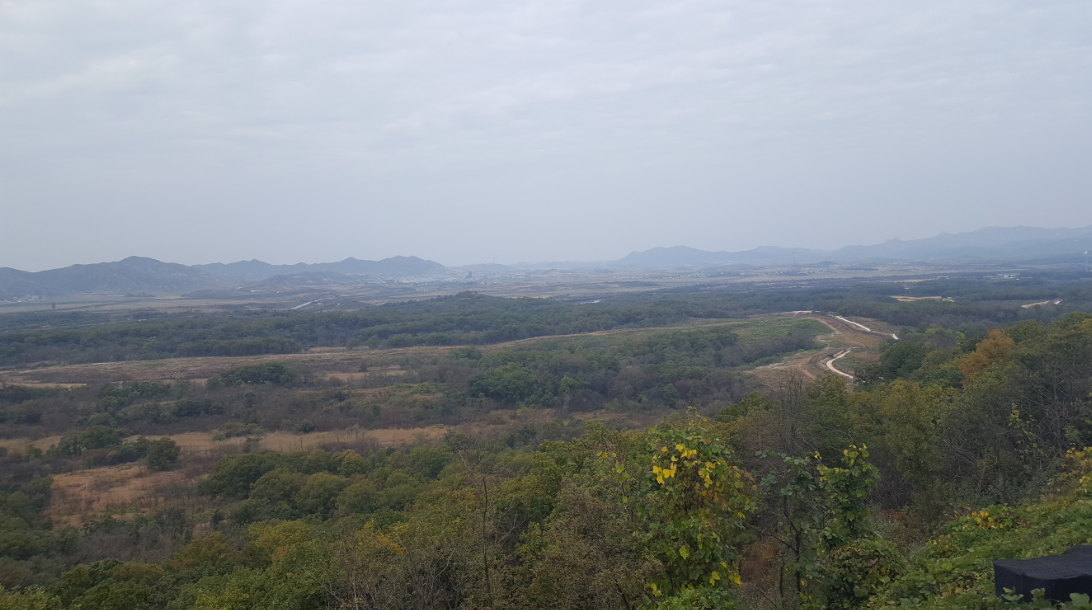 After lunch, I toured the JSA which was so cool! The JSA is where meetings with North Korea take place, specifically in the Military Armistice Conference Room. We have an army base at the JSA so two US soldiers were our tour guides. 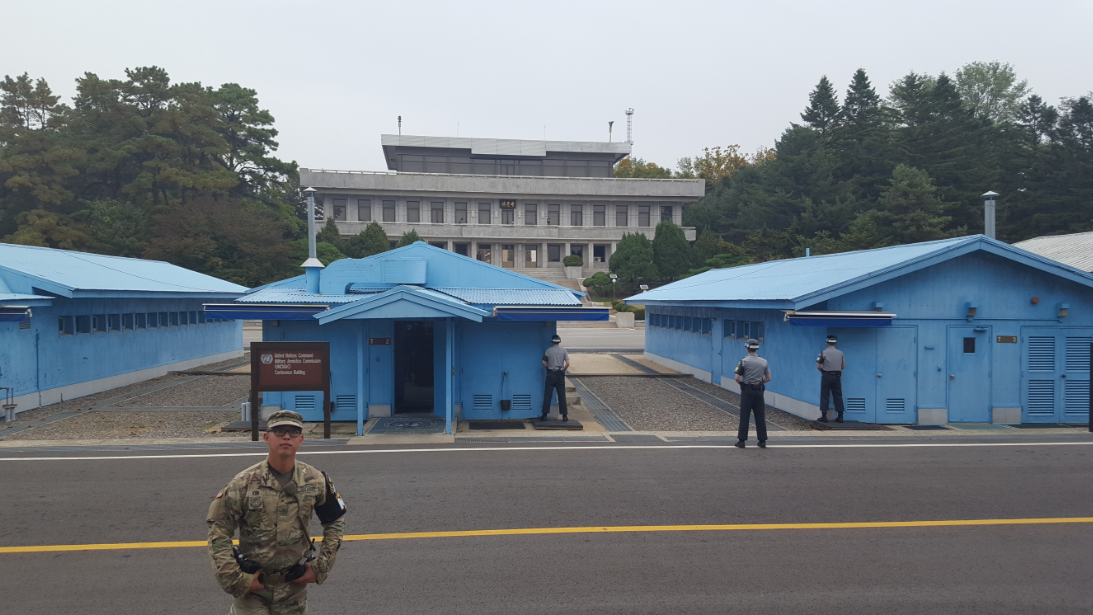 The rules were much more stringent here. Check out the opening line on the liability form. 1) Stay between two South Korean soldiers at all times. 2) Do not wave or gesture towards the North Korean soldiers. If you do, they will interpret that as a reason to attack.

I know I will abide by these rules. But what about these 30 other people?! Please let there not be an idiot in this group! 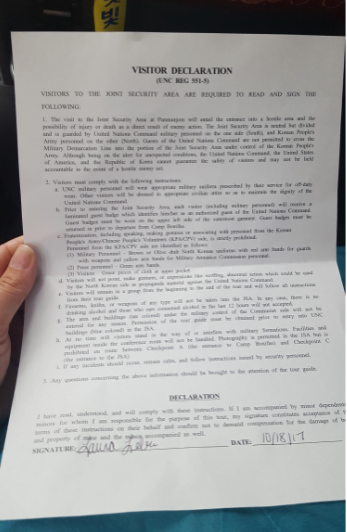 We were given about 10 minutes in the Military Armistice Conference Room. Here, I was able to technically stand in North Korea. It was a little unsettling but so awesome at the same time! Our US soldier, on the other hand, opted to stay on the South Korea side. 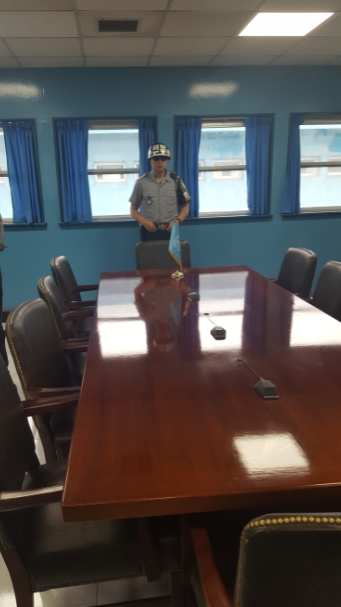 Saturday, I took the English Language Tour at the House of Sharing. I don’t remember exactly how I originally found out about this place, but wow, that was an eye opening experience! House of Sharing is a museum about and houses comfort women. Comfort women were young girls taken by the Japanese military and sex trafficked during World War II when Japan had control of Korea. 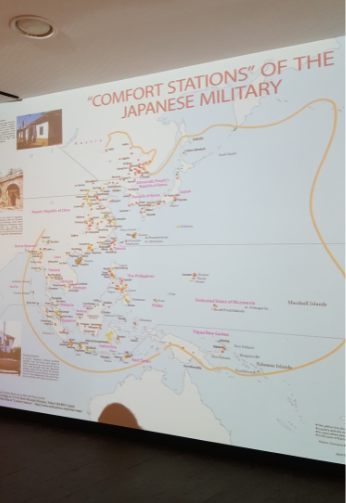 These women were forced to service up to 40 men a day but only given one condom per day. The rank of the military men determined what hours they were allowed at the comfort stations.  These women were inventoried under Recreational Supplies. How demeaning! The first and second-hand accounts of these women’s testimonies were graphic and disturbing. We were allowed to interact with 3 out of the 9 women at House of Sharing for about 45 minutes. Our tour guides were all bilingual so they were our translators. The Japanese have offered some money but the comfort women refuse as they want a public apology and for Japan to acknowledge they knew about comfort stations and women. 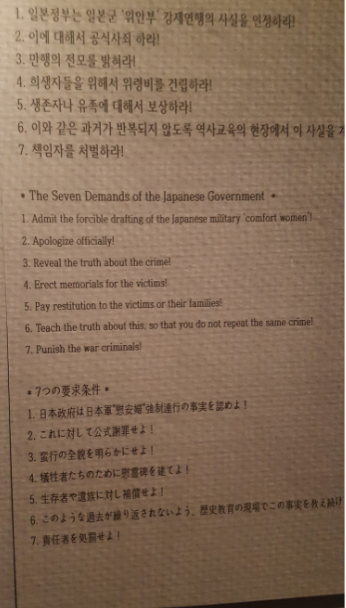 I’ve said it before and I’ll say it again… either we weren’t taught about this in our history classes or I wasn’t paying attention. Probably a combination of both. I despised History in school and only memorized enough to get through the tests. But wow… am I getting an education here! I know more about Korean history (World War 2 and Korean War) now than I ever have from all aspects: 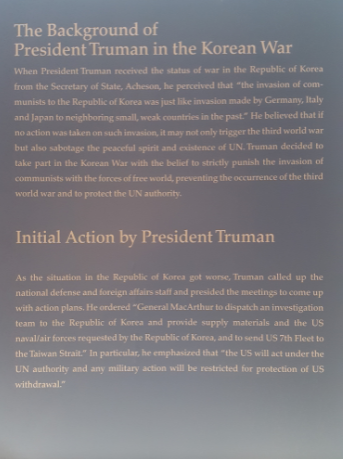